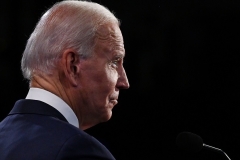 (CNSNews.com) – Joe Biden in Tuesday’s presidential debate accused President Trump, again, of not asking China to allow U.S. health experts to visit Wuhan, the epicenter of the coronavirus outbreak – a claim that has been debunked.

Setting out his argument that Trump mishandled the pandemic that has cost the lives of more than 200,000 Americans, Biden declared, “We were insisting that the Chine – the, the people we had in the ground in China should be able to go to Wuhan and determine for themselves how dangerous this was. He did not even ask [Chinese President] Xi [Jinping] to do that.”

As CNSNews.com reported earlier – together with a timeline of the relevant period – the administration offered to send help to China within just four days of the World Health Organization first becoming aware of a mystery illness outbreak in Wuhan on the last day of 2019. Administration official repeated the offer numerous times over the following weeks, with China resisting.

On February 17 two U.S. experts were finally allowed to visit, as part of a WHO team, which arrived in Wuhan on February 22.

Trump told reporters in March that he asked Xi personally “whether or not we could send some people, and they didn’t want that – out of pride.” “They don’t want us sending people into China, to help them,” he said. “I did discuss that about sending our people in. And, they didn’t really respond. We went again; they didn’t respond.”

The Washington Post in April awarded three Pinocchios to Biden’s assertion, at a CNN virtual town hall, that, “early on in this crisis, we said — I said, among others, that, you know, you should get into China, get our experts there, we have the best in the world, get them in so we know what’s actually happening. There was no effort to do that.”