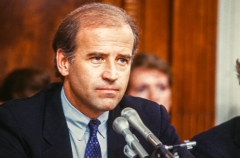 (CNSNews.com) – Democratic presidential nominee Joe Biden continues to refuse to tell voters ahead of Election Day whether he supports increasing the size of the Supreme Court, but 37 years ago he called past proposals to add justices to the bench a “bonehead idea.”

Then-Senator Biden was speaking during a Senate Judiciary Committee hearing in July 1983 on nominations to the U.S. Commission on Civil Rights, amid controversy over President Reagan’s attempts to replace three members of the commission.

Critics argued that Reagan had the right to do what he was doing, but in the process was damaging the credibility of the commission. Explaining his intention to oppose Reagan’s nominees, Biden offered an “analogy that is not totally appropriate,” and recalled President Franklin D. Roosevelt’s unsuccessful proposal in 1937 to expand the Supreme Court bench by six justices.

“President Roosevelt clearly had the right to send to the United States Senate and the United States Congress a proposal to pack the court,” Biden said. “It was totally within his right to do that. He violated no law, he was legalistically absolutely correct.”

After playing a clip of the 1983 comments and another, more recent one, Tapper said, “Biden opposes adding justices to the court. He has for decades. So, why is he refusing to weigh in on it now?”

“Because Donald Trump and the Republicans don’t get to set the terms of this debate,” replied Bedingfield, calling the issue a “hypothetical” one and a “distraction” by the Republicans to draw attention away from the bid to “ram through a nominee who, as I said, is going to change the makeup of the court, against the will of the American people.”

Senate Judiciary Committee hearings on Judge Amy Coney Barrett’s nomination to the Supreme Court are scheduled to begin on Monday.

“It’s just a simple question,” Tapper said. “[Biden] has long been against adding justices to the court. Has he changed his mind, or does he have the same position he’s had since at least 1983?”

Bedingfield deflected, saying the Republicans were trying to make court-packing the subject rather than “talk about the fact that they are pushing through a justice who is going to um, uh, be part of a court that could potentially overturn the Affordable Care Act, that could strip away protections for preexisting conditions, that could rule on a woman’s right to choose, that could rule on equal pay issues.”

“I get it, and we ask Republicans those questions,” Tapper interjected. “But we get to ask Democrats questions, too.”

“And this is a simple – it’s a simple question,” he continued. “And it’s one, frankly, that Trump did not invent. It came from the progressives in the Democratic Party. And I thought it was odd when Vice President Biden said the other day, in response to a reporter’s question, that voters do not deserve an answer on this. Of course voters deserve an answer on his position on every issue.”

Tapper said, “All right, well, I think a serious policy question is not a game, and I don’t think it’s Trump’s game.”