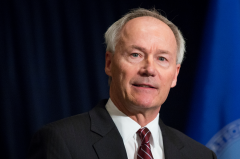 (CNS News) -- Arkansas's Republican Gov. Asa Hutchinson, whose election was endorsed by the American Conservative Union and who holds an ACU rating of 84, vetoed legislation overwhelmingly passed by the State Legislature, which would have prohibited the use of transgender medical treatments, including sex-change surgery, on children under the age of 18.

The Save Adolescents from Experimentation (SAFE) Act, HB 1570, passed the Arkansas House 70-22 and the Senate 28-7. Hutchinson vetoed the bill on Monday, April 5, much to the disappointment of conservatives.

"I was told this week that the nation is looking at Arkansas, because I have on my desk another bill passed by the General Assembly that is a product of the cultural war in America," said Hutchinson on Monday.

"I don’t shy away from the battle when it is necessary and defensible, but the most recent action of the General Assembly, while well-intended, is off course and I must veto House Bill 1570," he said. "I have signed the veto of House Bill 1570 today."

Hutchinson continued, "If House Bill 1570 becomes law, then we are creating new standards of legislative interference with physicians and parents as they deal with some of the most complex and sensitive matters involving young people. ... House Bill 1570 would put the state as the definitive oracle of medical care, overriding parents, patients, and healthcare experts."

"While in some instances the state must act to protect life, the state should not presume to jump into the middle of every medical, human and ethical issue," said the governor. "This would be, and is a vast government overreach."

The governor admitted, however, "that the General Assembly will likely override his veto."

The Family Research Council (FRC), which strongly supports the SAFE Act, issued a statement on Monday that said, "Asa Hutchinson appeared to yield to the sirens of the Left."

Jazz Jennings, a biological male, who was diagnosed with gender dysphoria when he was five. Jennings has been widely promoted by the liberal media since he was six, and underwent complete sex-change surgery in 2018. (Getty images)

"The Arkansas legislature has demonstrated leadership and courage in the face of the Left's campaign of deception combined with spineless woke-ism of Corporate America," said FRC President Tony Perkins. "The legislature cannot stop now and deprive Arkansas's children of this much needed protection. Under the leadership of Rep. Robin Lundstrum and Sen. Alan Clark, the Arkansas legislature courageously passed the first-of-its-kind protection for minors from experimental gender transition procedures."

"The harmful gender ideology sweeping across our nation creates a growing and urgent need for legislative protections for children vulnerable to life-altering procedures such as puberty-blocking drugs, cross-sex hormones, and irreversible surgeries," said Perkins.

A woman who has had her breasts removed to try to appear to be a man. (Screenshot, Larson Plastic Surgery)

"Research has not shown that these procedures are effective in improving patient's mental health," he added. "They have serious negative side-effects, up to and including permanent sterilization—thus violating the most fundamental principle of medical ethics, 'First, do no harm.'"

"While the governor called for a narrower bill, he did not seem to recognize that gender transition procedures are off-label, irreversible, and (as the name of the bill indicates) experimental," said Perkins. "It is never appropriate to experiment on our children, no matter how politically expedient."

"Family Research Council urges the Arkansas General Assembly to override Governor Hutchinson's veto and pass the SAFE Act into law to protect vulnerable children from experimental procedures that cause physiological trauma for those dealing with gender dysphoria," said Perkins.

Scarring from skin grafts used in phalloplasty, in which an artificial penis is created for a transgender "male." (Screenshot)

The SAFE Act states, "scientific studies show that individuals struggling with distress at identifying with their biological sex often have already experienced psychopathology, which indicates these individuals should be encouraged to seek mental health services to address comorbidities and  underlying causes of their distress before undertaking any hormonal or surgical intervention."

Some doctors already are puberty-blocking drugs to minors, even though there are few long-term longitudinal studies evaluating the risks of these drugs. The same holds for cross-sex hormones for children.

"[N]o randomized clinical trials have been conducted on the efficacy or safety of the use of cross-sex hormones in adults or children for the purpose of treating such distress or gender transition," states the legislation.

When it comes to gender reassignment surgery, this involves "alteration of biologically healthy and functional body parts -- in other words, fixing what is not broken.

"It is of grave concern to the General Assembly that the medical community is allowing individuals who experience distress at identifying with their biological sex to be subjects of irreversible and drastic non-genital gender reassignment surgery and irreversible, permanently sterilizing genital gender reassignment surgery, despite the lack of studies showing that the benefits of such extreme interventions outweigh the risks," reads the SAFE Act.

"I want people in Arkansas and across the country to understand that whether they’re transgender or otherwise, that they’re loved, they’re appreciated and they make a part of our state and we want to send a message of tolerance and diversity," said Gov. Hutchinson at Monday's press conference.