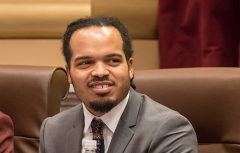 Jeremiah Ellison, the 41-year-old son of Minnesota Attorney General Keith Ellison, took to Twitter on May 31 to "officially" declare his support for Antifa, a radical, left-wing socialist group that has been labeled a "terrorist organization" by the president of the United States.

In response to Trump's May 31 announcement about Antifa, Ellison tweeted, "I hereby declare, officially, my support for ANTIFA.

"Unless someone can prove to me ANTIFA is behind the burning of black and immigrant owned businesses in my ward, I’ll keep focusing on stopping the white power terrorist THE[Y] ARE ACTUALLY ATTACKING US!"

Jeremiah Ellison, a college drop-out, describes himself on Twitter as a "visual artist, storyteller," and "political organizer," as well as a member of the Minneapolis City Council, Ward 5, a seat he won in the November 2017 elections. He is a member of the Democratic-Farmer-Labor Party (DFL).

His father, State Attorney General Keith Ellison, 56, is the man responsible for leading the prosecution of the policeman charged with murdering George Floyd on May 25 in Minneapolis.

Before serving as attorney general, Ellison, also a DFL party member, was the deputy chairman of the Democratic National Committee (2017-18). Prior to that he served in the U.S. House of Representatives (2007 - 2019), a seat now occupied by left-wing Rep. Ilhan Omar (D).

On Jan. 3, 2018, Keith Ellison tweeted a picture of himself holding a copy of the book, Antifa: The Anti-Fascist Handbook. In the tweet, Ellison wrote, "At @MoonPalaceBooks and I just found the book that strike[s] fear in the heart of @realDonald Trump."

Mark Bray, author of the Antifa book, wrote in the Washington Post on June 1, “Based on my research into antifa groups, I believe it’s true that most, if not all, members do wholeheartedly support militant self-defense against the police and the targeted destruction of police and capitalist property that has accompanied it this week. I’m also confident that some members of antifa groups have participated in a variety of forms of resistance during this dramatic rebellion."