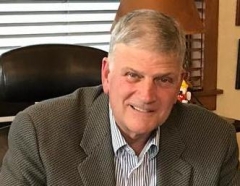 Commenting on the presidential election, Christina leader Franklin Graham said he was not disappointed in the outcome but was extremely grateful that Donald Trump was president for four years and had accomplished so many positive things, in particular recognizing the "the importance of prayer" and not being "ashamed of the name of Jesus Christ."

"President Trump will go down in history as one of the great presidents of our nation," said Rev. Graham, "bringing peace and prosperity to millions here in the U.S. and around the world."

In the Dec. 13 post on Facebook, Graham said, "People have asked if I am disappointed about the election. When I think about my answer, I have to say honestly, that I am grateful -- grateful to God that for the last four years He gave us a president who protected our religious liberties; grateful for a president who defended the lives of the unborn, standing publicly against abortion and the bloody smear it has made on our nation."

"I’m grateful for a president and a vice president who recognized the importance of prayer and were not ashamed of the name of Jesus Christ," said the evangelical leader.  "I’m thankful that the president stood against the secularists who wanted to take Christ out of Christmas and that he brought back the greeting 'Merry Christmas!'"

"So as we come to the end of this election season, I look back with a grateful heart and thank God for all of these things," said Graham.  "It is unfortunate that many people got confused and made the election about personalities rather than the policies of the candidates."

"President Trump will go down in history as one of the great presidents of our nation, bringing peace and prosperity to millions here in the U.S. and around the world," he said. "May God bless him, Melania, and their family, as God leads him to the next chapter in his life."