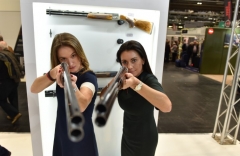 "All other likely background check-related sales (152,512) increased year-over-year by 74.6%," said the SAAF. "This includes so-called 'multiple' sales where the allocation between handguns and long-guns cannot be determined from the data record."

“Once more, the spurt in firearms sales in April 2020 is particularly notable for its handgun component," said SAAF Chief Economist Jurgen Brauer. "The ratio of handguns to long-guns sold now stands at a new record of 1.94, breaking the previous high of 1.84 set just one month ago.”

The SAAF’s firearms unit sales estimates "are based on raw data taken from the FBI’s National Instant Criminal Background Check System (NICS), adjusted for checks unlikely to be related to end-user firearms sales," states the organization.  "For example, the FBI’s raw numbers (for April, some 2,878,176) cannot be taken at face value as large numbers of background checks are unrelated to end-user sales."

As an example, said the SAAF, "in April the state of Kentucky conducted close to 170,000 so-called permit checks and rechecks alone whereas end-user checks at firearms retailers likely amounted to about 40,000 checks."