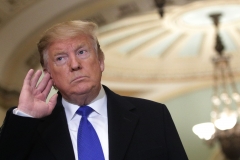 In addition, "the latest figures include 38% who Strongly Approve of the job Trump is doing and 41% who Strongly Disapprove," said Rasmussen. "This gives him a Presidential Approval Index rating of -3."