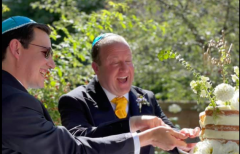 (CNS News) -- Jared Polis, the openly gay Democratic governor of Colorado, "married" his long-time partner, Marlon Reis, in a small Jewish ceremony on Sept. 15. Traditional, orthodox Judaism teaches that marriage is between one man and one woman.

“Mawage. Mawage is what brings us together today," tweeted Polis, a former member of Congress, on Sept. 15.

"Today First Gentleman Marlon Reis and I were married in a small ceremony with family and a few close friends," said Polis. "We are both excited for this new chapter in our lives together, and our hearts are full with the blessings of health, love, and family."

The marriage ceremony was performed by Rabbi Tirzah Firestone, a Jungian psychotherapist and a leader in the international Jewish Renewal Movement.

According to MyJewishLearning.com, "Jewish Renewal is a Jewish religious movement that combines a heavy emphasis on spiritual practices, particularly those drawn from Hasidic Judaism, with socially progressive values like gender egalitarianism and environmental awareness. Its practices draw from Jewish mysticism and Hasidic thought, recast in contemporary progressive terms and deeply influenced by the 1960s counterculture. Jewish Renewal has been described as a marriage of Hasidism with a New Age ethos."

Asked for comment about the "marriage," Rabbi Yaakov Menken, managing director of the Coalition for Jewish Values (CJV), told CNS News that his organization opposes such arrangements because marriage is reserved for a man and a woman.

"Marriage is described in Genesis as directly connected to having children," said Rabbi Menken. "So even without reference to clear prohibitions in Leviticus, it is obvious that a same-sex union is foreign to Judaism."

Polis, 46, was elected governor of Colorado in 2018. He is the first Jew to hold that office in Colorado. "First Gentleman" Marlon Reis describes himself as an "animal advocate and a writer," on Facebook. The two men are the parents of two children, ages 7 and 9.

Polis has a long history of supporting liberal/left causes and voting (in Congress) for their advancement.