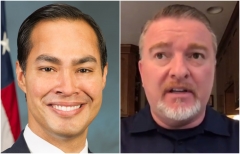 (CNS News) -- Although the police union officials who spoke in New York City on Tuesday roundly and repeatedly condemned the officers charged in the death of George Floyd, former HUD Secretary Julian Castro denounced the president of the State Police Benevolent Association for "throwing a tantrum" at the press conference.

"The public doesn’t serve you -- you serve the public," said Castro in a June 9 tweet.

In the video, O'Meara holds up his police badge and says, "This [badge] isn’t stained by someone in Minneapolis. It’s still got a shine on it, and so do theirs, so do theirs [other N.Y. officers present]."

O'Meara continued, "Nobody talks about the number of police that were killed last week in the United States of America, and there were a number of them. We don’t condone Minneapolis. We roundly reject what he did as disgusting. It’s disgusting! It’s not what we do. It’s not what police officers do."

"Our legislators abandoned us," said O'Meara. "The press is vilifying us. Well, you know what guys, I’m proud to be a cop and I’m going to continue to be proud to be a cop until the day I retire. And that’s all I have to say.”

Some left-wing legislators, such as Rep. Ilhan Omar (D-Minn.), support defunding and dismantling the police, a position that is also advocated by Black Lives Matter.