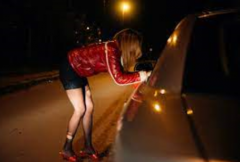 The office also moved to dismiss 914 Prostitution and Unlicensed Massage cases, as well as 5,080 Loitering for the Purpose of Prostitution cases.

“Over the last decade we’ve learned from those with lived experience, and from our own experience on the ground: criminally prosecuting prostitution does not make us safer, and too often, achieves the opposite result by further marginalizing vulnerable New Yorkers,” said District Attorney Vance in a statement.

“For years, rather than seeking criminal convictions, my Office has reformed its practice to offer services to individuals arrested for prostitution," said Vance. "Now, we will decline to prosecute these arrests outright, providing services and supports solely on a voluntary basis."

"By vacating warrants, dismissing cases, and erasing convictions for these charges, we are completing a paradigm shift in our approach," he said. "These cases – many dating back to the 1970s and 1980s – are both a relic of a different New York, and a very real burden for the person who carries the conviction or bench warrant."

Although prostitution itself will not be prosecuted under the new approach, crimes related to it such as trafficking or pimping will still be prosecuted, according to the district attorney.

The National Center on Sexual Exploitation commended the DA's office "for refusing to criminalize victims of prostitution by announcing that it wouldn’t prosecute individuals in prostitution and unlicensed illicit massage, and instead, would focus efforts on prosecuting the buyers of prostituted persons, as well as their traffickers/pimps."

“The law should penalize those who pay to use the bodies of other people for sex and those who seek to traffic them, rather than targeting vulnerable people who need exit services rather than fines and jail time," said Dawn Hawkins, CEO of the National Center on Sexual Exploitation.

“We welcome this action from DA Vance to dismiss all pending prostitution and unlicensed massage related cases, as well as his new policy to decline to prosecute these arrests going forward,” said Abigail Swenstein, staff attorney with The Legal Aid Society’s Exploitation Intervention Project.

Cecilia Gentili, founder of Transgender Equity Consulting, praised the decision. “This resolute action to actively decriminalize sex workers is the kind of change our community has been hoping for, advocating for, for decades,” she said.

“This initiative to end the prosecution of people who are simply trying to work to survive through a depressed economy, and to immediately dismiss the almost 6,000 bench warrants for loitering, prostitution, and non-licensed massages is one of the most significant steps taken nationally in the effort to stop criminalizing sex work," said Gentili.

"With the recent passage of the Walking While Trans bill, and the commitment our officials are showing to addressing this draconian use of laws which disproportionately criminalize queer, trans and Black and Brown women, New York City is showing we can do what it takes to do right for all of us!”