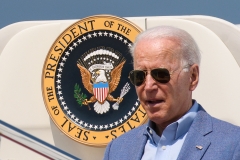 (CNS News) -- A new Marist survey in partnership with NPR and the PBS NewsHour shows that only 42% of registered voters approve of Democratic President Joe Biden's job performance; a full 55% disapprove of his job performance.

For the poll, conducted Dec. 11-13, NPR/PBS NewsHour/Marist asked 1,400 U.S. adults, "Do you approve or disapprove of the job Joe Biden is doing as president?"

In addition, 52% who disapproved of Biden's job performance were "non-white"  and 65% were "Latino."

Surprisingly, among the youngest polled (Gen Z/Millenials, 18-39), 54% said they disapproved of Biden and only 41% approved.