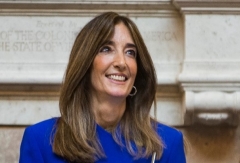 (CNS News) -- Although legislation that would reduce the charge for assaulting a police officer from a felony to a misdemeanor has passed the Virginia Senate and is now in the House of Delegates, the office of House Speaker Eileen Filler-Corn (D-Fairfax) did not respond when asked if the Speaker supports the bill.

"On Aug. 26, the Virginia Senate passed SB 5032, which would give a judge or a jury discretion in whether to impose a misdemeanor penalty (instead of the prescribed felony) for a simple assault of a police officer, judge, or EMS personnel. This legislation is now in the House of Delegates. Question:  Do you support the House version of SB5032, yes or no?"

The speaker's office did not respond to email inquiries on Wednesday and Thursday and a telephone inquiry on Thursday.

The legislation passed in the Virginia Senate on party lines, Aug. 26.

Democrats dominate the House of Delegates, 55-45.

Commenting on the legislation, Virginia Del. John Avoli (R-Staunton) told CNS News, "This bill empowers lawless rioters, like we see across the country at this moment, to assault the very people charged with keeping our communities safe .... Democrats have chosen to side with criminals over law enforcement."