(CNS News) -- The Islamic Education Center in Houston, Texas, recently posted a video on YouTube of children in its community, ages 4-14, singing the song "Salam Farmande" (Hello Commander), which includes lyrics where the kids "make an oath" to "Sayeed Ali," and sing "I'll be your martyr."

Sayeed Ali Hosseini Khamenei is the Supreme Leader of Iran, a Shia Muslim. Some defenders of the video, however, claim that the Sayeed Ali referenced is the 12th Imam and Shia Messiah from the 9th century, who will return to establish peace on Earth. Yet other videos of the same song show Muslim children pinning pictures on their chest of Sayeed Ali Khamenei, the current Supreme Leader, and of Qasem Soleimani.

Soleimani was a major general in the Islamic Revolutionary Guard, and former right-hand man to Ali Khamenei. The U.S. designated Soleimani a terrorist in 2005. He was killed by a U.S. drone strike in 2020 on the orders of President Donald Trump. Soleimani is considered a hero and martyr by the Iranian government. He is directly named in the song "Salam Farmande" sung by the Muslim children in Houston.

M. Hanif Jazayeri, the editor of Free Iran and affiliated with the National Council of Resistance of Iran, which supports creating a democracy in that country, said on Twitter that the video constitutes "Iran recruiting child soldiers" in the U.S.

They sing "Don't look at my young age" "I will be your soldier" "I make an oath. One day when you need me, I will be your martyr" pic.twitter.com/fYGZJOQ2es

As he tweeted, "State media airs video of kids in Houston TX swearing allegiance to the regime's Supreme Leader Khamenei. They sing 'Don't look at my young age' 'I will be your soldier' 'I make an oath. One day when you need me, I will be your martyr."

In the original video posted by the Islamic Education Center in Houston it included captions in English. Since last Friday those captions were turned off and the video was removed. But it was reposted on Islamic TV's YouTube page where it clearly states "Salam Farmande/Houston TX USA."   Parts of the song are in Farsi, other parts in English.

CNS News did take some screenshots of the video and the lyrics.  In the captioned translation, some of the lyrics state: "Salam Farmande [Hello Commander] ...

"I'll be your servant. I make an oath that I will stay loyal to you, oh Imam. I long for your presence every day and every night. ... Don't worry about it, my Agha [leader], Your soldiers are here without fear."

The word "shaheed" is used both in Arabic and Persian and it means "martyr," said Jazayeri. He also explained a sentence in Farsi in the song, "which is repeated more than once, makes a direct reference to Khamenei's name. It says 'Seyyed Ali.' That's his title and first name, and that's how he is referred to in pro-regime poems and songs. His title and name is Seyyed Ali Khamenei."

In the emotional and patriotic video, the boys and girls are dressed well and often salute and wave Iranian flags.

The video apparently was made on July 22 at the Houston center. Flyers of the event were posted on Twitter and Instagram.  (See image below.)

The flyer partly reads, July 22, 2022, 6:00 pm, Salam Farmande, Group Recitation By The Houston Community. ... IEC, 2313 S. Voss Road, Houston, TX 77057... We request every member of our community to join us along with their kids as we express our love for the imam of our time by reciting Salam Farmande. The group recital will be filmed & shared on social media. #salamfarmande."

In one tweet of the flyer (@MojtabaRohizade), it states at the top, as translated by Google and Jazayeri, "There is nothing left for the White House to become a Hosseiniyeh, God willing. #Salamfarmande in America."  A Hosseiniyeh is a mosque.

Apparently, this tweet is calling for the White House to become a mosque -- "God willing." 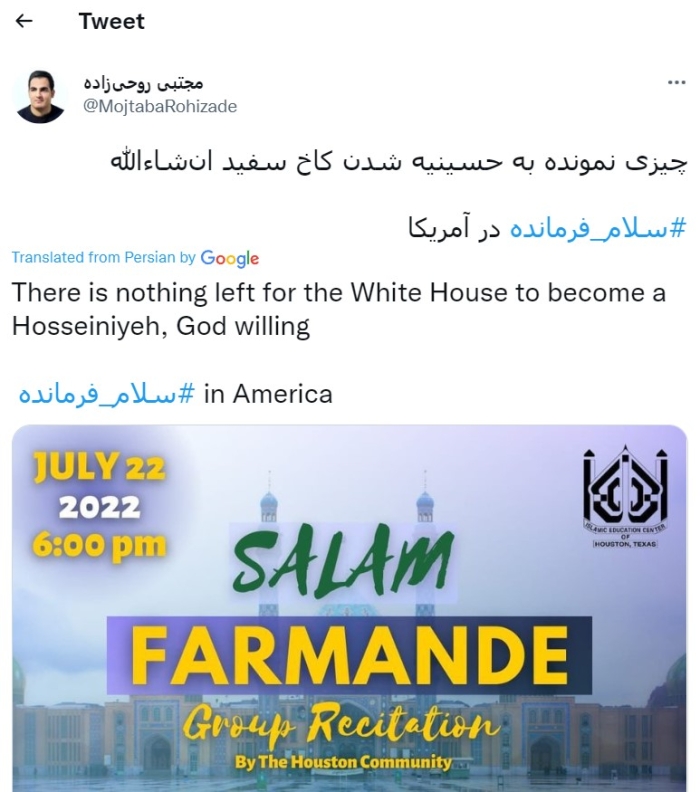 In a story about the video, the Houston Chronicle reported, "[A] Texas-based Middle East expert who reviewed the video agreed that the song makes multiple indirect references to the Iranian supreme leader, Ali Khamenei, the country's highest ranking official who holds ultimate power in Iran. The 83-year-old Shiite leader has bristled in response to most U.S. foreign policy. Iran and the U.S. ended diplomatic relations in 1980."

"The expert, who asked not to be identified due to fear of retribution, also shared links to coverage of the Houston music video by state-controlled Iranian outlet Fars News, with the headline 'Salam Farmandeh Went to America,'" said the Chronicle. 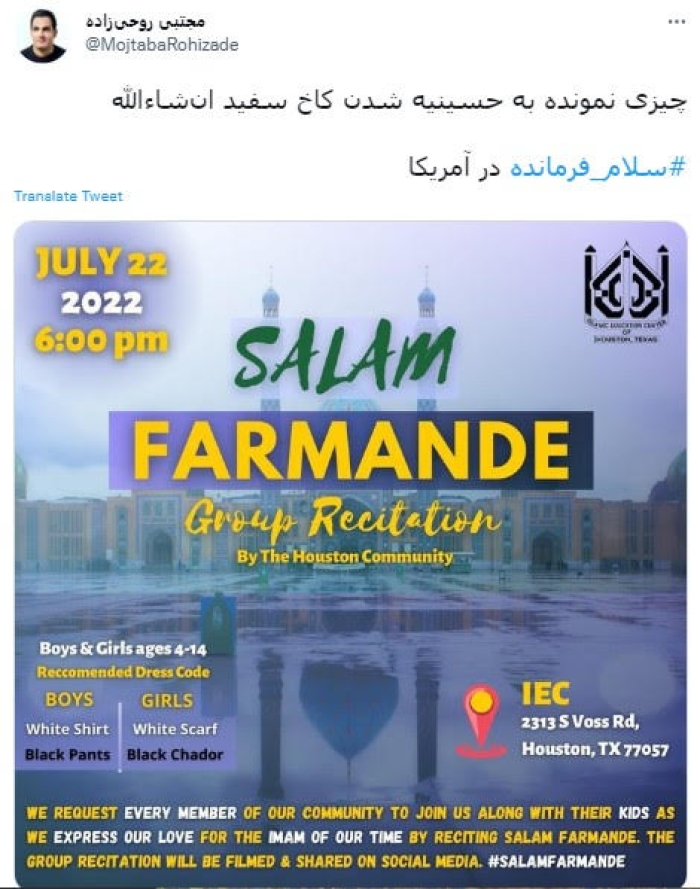 In an Indonesian video of the song, the children have pictures of Ali Kamenei and Soleimani pinned to their chests.  (See image below.)

Jazayeri also told CNS News, "I can understand that Khamenei's regime would have agents in places like Iraq or Nigeria or Lebanon indoctrinating young people. But Texas is a different story. U.S. law enforcement should be investigating such centers."

CNS News contacted the Islamic Education Center in Houston for comment, but it did not respond before this story was posted. 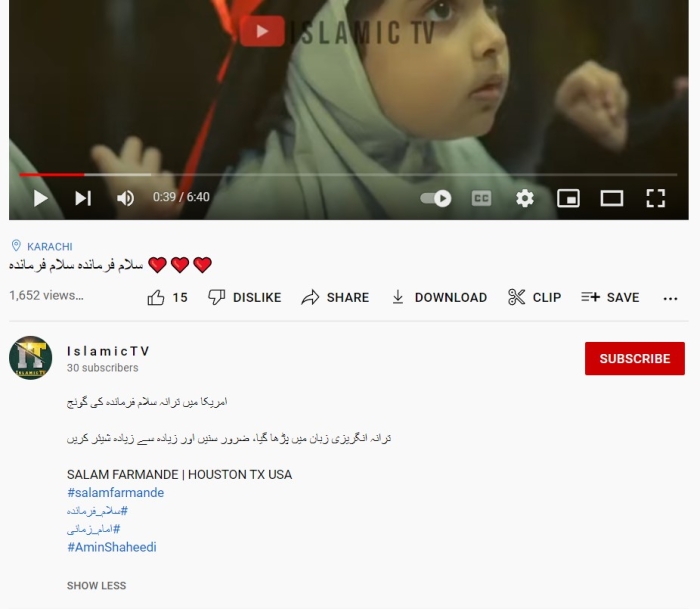 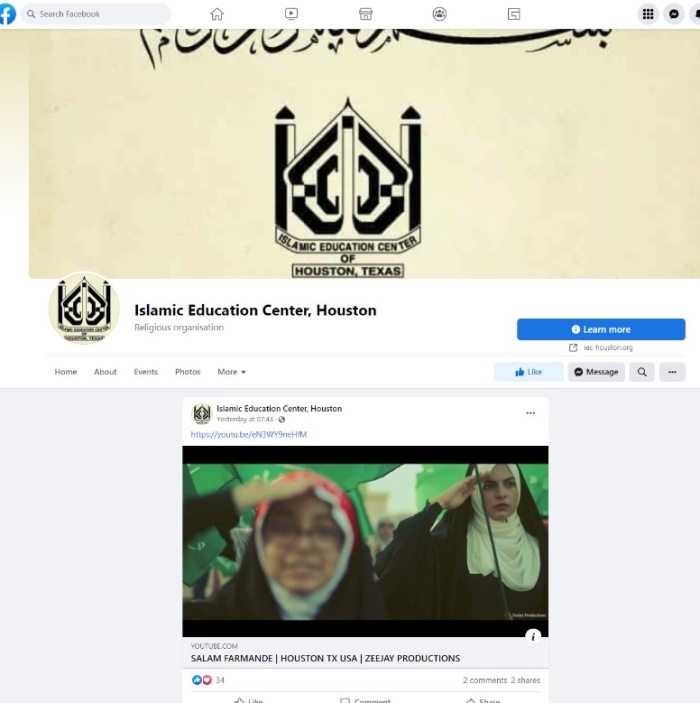