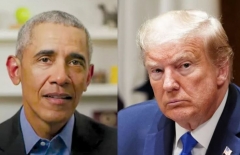 The "margin of sampling error is ±4 percentage points at the 95% confidence level," in the Trump poll, according to Gallup, which means his job approval rating could be as high as 46%.