Gallup: President Donald Trump is the Most-Admired Man of 2020 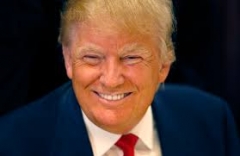 In the survey, Gallup asked, "What man that you have heard or read about, living today in any part of the world, do you admire most?"

In response, 18% of Americans named Trump, the highest percentage. In second place was Barack Obama with 15%.

"The incumbent president is usually top of mind when Gallup asks Americans to name, without prompting, which man living anywhere in the world they admire most," reported the polling firm.  "In the 74 times Gallup has asked the open-ended most admired man question since 1946, the incumbent president has topped the list 60 times."

"Barack Obama, Donald Trump and Joe Biden are likely to remain strong contenders for the most admired man title in the coming years," said Gallup. "Should Trump continue to dominate Republicans' consciousnesses -- currently, Republicans rarely name any other public person than him -- he will have a good chance of winning in future years, especially if Democrats continue to split their choices between Obama and Biden."

(Results for this Gallup poll are based on telephone interviews conducted Dec. 1-17, 2020, with a random sample of 1,018 adults, aged 18 and older, living in all 50 U.S. states and the District of Columbia.)