Gallup: Only 32% of Blacks Say Abortion Should be Legal 'Under All Circumstances' 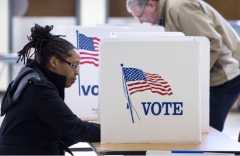 (CNS News) -- Only 46% of Black Americans believe that abortion is "morally acceptable," and only 32% say it should be legal "under all circumstances," according to a new Gallup survey.

"As shown in this analysis," said Gallup, "Black Americans have become more liberal on abortion over time, but they remain more conservative than their fellow Democrats."

In the survey, Gallup asked, "Regardless of whether or not you think abortion should be legal, please tell me whether you personally believe that in general abortion it is morally acceptable or morally wrong."

"This shift in Black Americans' attitudes has not occurred in a vacuum and appears to be closely tied to increasing political polarization on abortion," said the survey firm. "Party identification is a core demographic variable of interest in today's social, political and cultural environment. Since over three-quarters of Black Americans identify with or lean toward the Democratic Party, any broad trends that differentially affect Democrats' attitudes about abortion are -- everything else being equal -- going to affect Black Americans' as well."

"Democrats' abortion attitudes have shifted significantly over the past decade," said Gallup. "Democrats have become increasingly more likely to say abortion is morally acceptable and to say that abortion should be legal in all circumstances, while Republicans' more conservative attitudes on both measures have remained roughly stable."

The poll showed that 62% of Democrats/Democrat leaners believe abortion is "morally acceptable," while only 26% of Republicans say the same.

"[I]t is a reasonable assumption that the shift in Black Americans' attitudes toward abortion is related to the shift among Democrats more broadly," reported Gallup.

The survey firm also commented on how religion and attendance at church may affect black Americans' views on abortion versus those of Democrats and Republicans.

"[C]onsidering the greater diversity of views on abortion among Black Americans than among Democrats more generally, it is at least within the realm of possibility that Black voters who are personally anti-abortion will be negatively affected by [Joe] Biden's abortion position," said Gallup.

"More generally, Biden is going to have to maintain his support for abortion rights as expected by progressives while attempting to maintain enthusiasm among Black Americans and other religiously oriented voting segments," said the survey firm.