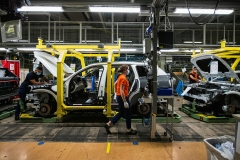 In response, 50% of American adults said "protection of the environment" and 42% said "economic growth."

Back in 2012, when the economy was still struggling, 54% prioritized economic growth while 36% favored protecting the environment.

"While slightly more U.S. adults today prioritize the environment over economic growth, the 50% doing so is down from 60% in early 2020 (largely before the pandemic was declared) and 65% in 2019, and is the lowest recorded since 2015, when 46% held this view," reported Gallup.

"As Gallup has reported previously, Americans' views on the environment vs. economy question are sensitive to national economic conditions," said the survey firm.  "In general, the higher the unemployment rate, the higher the percentage prioritizing the economy."

On the political scale, Republicans overwhelmingly prioritize "economic growth" over "protection of the environment" in comparison with Democrats, 68% to 23%.

"Both decisions are not without economic risks to U.S. jobs and business competitiveness, which no doubt resonates with the large segment of Americans who favor prioritizing the economy over the environment," said Gallup.