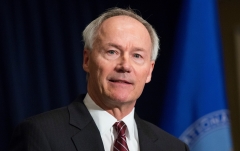 "This law simply says that female athletes should not have to compete in a sport against a student of the male sex when the sport is designed for women’s competition," said the governor on Thursday.  "As I have stated previously, I agree with the intention of this law. This will help promote and maintain fairness in women’s sporting events.”

The new law states that athletic clubs or sports teams sponsored by a school shall be designated as a men's team or a women's team "based on biological sex." Private schools are also affected if their teams play against public school teams.

In addition, the law allows for players, teams, or institutions to take legal action against any entity that may discriminate against them because they maintain a real female team or a real male team.

"A recent study of female and male Olympic performances since 1983 by Valerie Thibault, et al., 'Women and Men in Sport Performance: The Gender Gap Has Not Evolved Since 1983,' Journal of Sports Science & Medicine, Vol. 9, No.2 (2010), found that although athletes from both sexes improved over the time span, the 'gender gap' between female and male performances remained stable, which suggests that 'women's performances at the high level will never match those of men," the law states.

In addition, reads the law, "Duke University School of Law professor and All-American track athlete Doriane Coleman, tennis champion Martina Navratilova, and Olympic track gold medalist Sanya Richards-Ross recently wrote, "[T]he evidence is unequivocal that starting in puberty, in every sport except sailing, shooting, and riding, there will always be significant numbers of boys and men who would beat the best girls and women in head-to-head competition. Claims to the contrary are simply a denial of science."

Commenting on the new law, Alliance Defending Freedom General Counsel Kristen Waggoner said, “Women and girls deserve to compete on a level playing field, and Gov. Hutchinson and the Arkansas Legislature have acted to ensure that happens for all female athletes in the state, whether in high school or college."

"It’s unfair to force women and girls to compete in sports against males," she said.  "We commend the governor and state lawmakers for standing up to the corporate interests and activists who have been pressuring them to cave to a ‘woke’ agenda at the expense of women and girls."

Canadian transgender woman cyclist Rachel McKinnon (center) celebrates her gold medal on the podium with bronze medalist Kirsten Herup Sovang (R) of Denmark and silver medalist Dawn Orwick (L) at the UCI Masters Track Cycling World Championships, in Manchester on October 19, 2019. She has defended her right to compete in women's sport despite accepting trans athletes may retain a physical advantage over their rivals. (Photo by OLI SCARFF/AFP via Getty Images)

"When we ignore science and biological reality, female athletes lose medals, podium spots, public recognition, and opportunities to compete," she said.  "We thank Gov. Hutchinson and Arkansas legislators for recognizing that and helping to protect a rising generation of young women so they can continue to pursue their dreams.”

In addition to Arkansas, Idaho and Mississippi have passed laws to protect girls' sports. South Dakota Gov. Kristi Noem (R) strongly indicated that she would sign similar legislation but has since vetoed the bill in her state. Noem reportedly changed her mind after being lobbied by the Chamber of Commerce, the Board of Regents, and multi-national corporations, such as Amazon.

Alphonso David, president of the pro-LGBTQ Human Rights Campaign, said, "Governor Hutchinson’s eagerness to sign this discriminatory legislation is an affront not just to the transgender kids it is bound to hurt but to all Arkansans who will be impacted by its consequences."

"Hutchinson is ignoring the ugly history of states that have dared to pass anti-transgender legislation in years past, and by doing so he is exposing Arkansas to economic harm, expensive taxpayer-funded legal battles, and a tarnished reputation," said David.