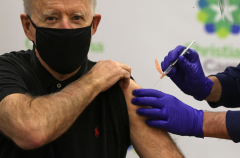 (CNS News) -- The Archdiocese of New Orleans, which serves more than 520,000 Catholics, issued a statement on Feb. 26 explaining that the latest COVID vaccine from Janssen/Johnson & Johnson is "morally compromised" because it was produced using cell lines from an aborted baby.

The archdiocese recommends the vaccines from Moderna or Pfizer for those Catholics who may choose to receive the vaccine.

In the statement, the archdiocese explains that vaccines have been made over the years from "morally compromised cell lines created from two abortions that occurred, one in the 1970s and one in the 1980s."

However, "the two vaccines currently available from Pfizer and Moderna do not rely on cell lines from abortions in the manufacturing process and therefore can be morally acceptable for Catholics as the connection to abortion is extremely remote," states the archdiocese.

Nonetheless, "It is under the same guidance that the archdiocese must instruct Catholics that the latest vaccine from Janssen/Johnson & Johnson is morally compromised as it uses the abortion-derived cell line in development and production of the vaccine as well as the testing," according to the archdiocese.

The statement continues, "we advise that if the Moderna or Pfizer vaccine is available, Catholics should choose to receive either of those vaccines rather than to receive the new Johnson & Johnson vaccine because of its extensive use of abortion-derived cell lines."

The Archdiocese of New Orleans was established in 1793. It operates 108 parishes, 5 Catholic colleges, and 20 high schools. The archdiocese is currently headed by archbishop Gregory Michael Aymond.

Although several Catholic bishops and priests have advised against taking any of the COVID vaccines currently available, the Vatican issued a statement in December saying that it is morally permissible to receive the Moderna or Pfizer vaccine.

However, the Vatican also stressed that vaccination "must be voluntary," not compulsory.

People who object to vaccines "produced with cell lines" from aborted babies must take other measures to protect themselves from becoming carrriers of the virus, said the Congregation for the Doctrine of the Faith, the Vatican office that clarifies and enforces the Church's moral teachings.

The Vatican has not issued a statement on the Janssen/Johnson & Johnson vaccine.