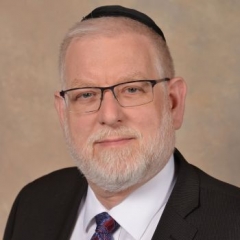 (CNS News) -- The Coalition for Jewish Values (CJV), which represents more than 1,500 traditional, Orthodox rabbis, strongly criticized the Anti-Defamation League (ADL) for not calling for consequences against antisemitic members of Congress, and instead attacking Fox News over illegal immigration.

"Squad" member Rep. Alexandria Ocasio-Cortez (D-N.Y.) voted "present," and then later apologized for not voting no. “To those I have disappointed — I am deeply sorry," she said.

In a statement about ADL President Jonathan Greenblatt, the CJV President Rabbi Pesach Lerner said, "In January, Greenblatt correctly stated that Tlaib's depiction of Israel as 'apartheid' was both 'false and hateful.' But now she restated that same false and antisemitic claim in order to demonize Israel's self-defense, and joined her fellow 'Squad' members to strip funding from a program designed to neutralize the war crimes of the Hamas terror organization."

"Greenblatt was right to say that this 'shameful act' by 'the Squad' emboldens Hamas & Hezbollah, but why has he not called for consequences after yet another antisemitic fiasco from the 'Squad?'" said Rabbi Lerner.

"Instead, he diverts our attention with another partisan fight against a conservative public figure who made controversial, debatable, but certainly not hateful remarks," said the CJV in reference to Fox News' Tucker Carlson, who has reported on Democrats' using illegal immigrants to replace voters in the U.S.

"Just last month, the ADL refused to state categorically that singling out Israel for hateful boycotts was antisemitic," said the CJV president. "If the current leadership of the ADL is unwilling to call out real antisemitism in an unbiased fashion, the ADL must urgently find new leadership who will."

The ADL states that its mission is "to stop the defamation of the Jewish people, and to secure justice and fair treatment to all."

In August, the CJV criticized the ADL for partnering with a Jewish college organization to combat antisemitism on campuses because, the CJV explained, the ADL "lacks the moral clarity to properly identify antisemitism, let alone combat it."

An ADL spokesman wrongly claimed, according to the CJV, that “anti-Israel activism in and of itself is not antisemitism."

Rabbi Moshe B. Parnes, the CJV Southern Regional Vice President, said, “Only someone with no sense of Jewish history could claim that BDS [Boycott, Divestment, Sanctions] is not antisemitic."

"The first Nazi edict was a boycott of Jewish businesses; economic warfare directed against the Jewish people was then and has always been one of the first signs of systemic Jew-hatred," said Rabbi Parnes. "Combating antisemitism in all its forms defined the ADL’s mission throughout its long and storied history, and it is crucial that it return to its core goals.”

The CJV said, "For millennia, antisemitism has been driven by fabricated conspiracy theories regarding Jewish supremacists acquiring wealth by means of thievery and fraud. In the modern era, the same fictional beliefs are applied to the State of Israel. BDS arose from and is perpetuated by the same concocted claims expressed as land theft, apartheid, ethnic cleansing and similar terms, providing a prime example of ancient antisemitism in new dress."

The CJV is a non-profit that advocates for classical Jewish ideas and standards in matters of American public policy. It is the largest rabbinic public-policy organization in the country, representing over 1,500 traditional Jewish leaders.