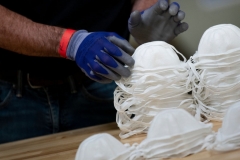 A worker at a Honeywell International Inc. factory producing N95 masks May 5, 2020, in Phoenix, Arizona. (Photo by BRENDAN SMIALOWSKI/AFP via Getty Images)

(CNSNews.com) – The mayor of Yuma, Ariz., Doug Nicholls told CNN’s “Cuomo Prime Time” on Tuesday that he fully supports wearing masks to prevent COVID-19 spread, but he voted against the city mandating it in a council vote, because he’s concerned about government overreach.

Nicholls said he’s “very concerned about overreach” and “about the government having to be the end all be all for everything.”

NICHOLLS: I did vote against it, but I do fully support wearing of masks. What my concern was wasn't wearing the masks, it was mandating it by government, that people need to take ownership of the issue. Government should not be telling us absolutely everything we need to do. We need to understand what the experts are telling us and then take that personal responsibility to make that happen.

CUOMO: Are you against the Arizona helmet law?

CUOMO: Are you against the seat belt law?

CUOMO: So why would you be against masks if not for naked political play?

NICHOLLS: It's not naked political play, because I'm not doing anything on the national scale. I was voting in a local action and if I was against it, I did not need my council to vote. I could have put the document out that we didn't need to mandate masks, but instead I went through the Democratic process. We had our council convene. We voted on it, and right after that meeting I crafted the language and issued that document to make masks mandated in the city of Yuma, per the direction of our elected counsel.

CUOMO: Why am I wrong to suggest you're trying to have it both ways, that you did right thing by the community, which is make sure that masks are mandatory so you can save some lives and at the same time as a Republican, check the box that you say what Trump wants you to say by voting against it.

NICHOLLS: Well, I don't know about what the president wanted me to say today -- or I'm sorry, last Friday, I'm not sure what he wanted me to say. These are things as the mayor and in a proclamation of emergency status that we've been in the last few months, I'm very concerned about overreach.

I'm very concerned about the government having to be the end all be all for everything. We're a nation of people, not a nation of a government. So the people need to own this action, not the government. So as the person that had to enact this and has that responsibility, I wanted to be clear that it's not something I'm looking to lord over people, that this comes down to the individual not to --

CUOMO: But Mr. Mayor, that's exactly what it is, is something that you have to lord over them because it's like a seat belt, it's like a helmet, except by doing this you not only help keep yourself safe but other relatives and family and vulnerable loved one as well. They can come after you for how long you close the schools and keep businesses closed but what you do with state services and functions. That's the government, making decisions about when it's going to provide and not provide services, but when you know that the only thing that we have going for us that you can control is what you do with distance and what you do in terms of controlling your own face space, why would you see that as a liberty issue and not a necessary emergency measure?

CUOMO:  But you can't make me sick by how you decide to eat. You know you’re not three big macs for making me fat. This is something different. You know this, Mr. Mayor, because you made sure that the council was allowed to vote and did the right thing. Why would you vote against something that you engineered to happen in the first place? Doesn't make any sense.

NICHOLLS: I did not engineer it. It is something that I put before the will of the people. We opened up the outreach to the people the day before so we could get as much input as we could get into that decision. And up until just right before the vote, I was debating either way to go on this issue. So there wasn't a pre-engineered, predefined vote.

CUOMO:  Except you said you didn't need to do this. You said you could have done it yourself. You did it in the Democratic process because you wanted the council to vote. You know they were going to vote in favor of it. They voted in favor of it, you voted against it. All I'm saying is, Mr. Mayor, did you the right thing. You're keeping people safe in your community. I just don't understand why you'd want to send a mixed message. Last word to you.

NICHOLLS: I did not know how the council was going to vote. That was debated right there in the meeting. Arizona has very strict open meeting laws. I'm not allowed to poll my council beforehand. It happened there live real-time in front of the people of Yuma. So this idea that I'm trying to play both sides just isn't true.

CUOMO:  I take your argument. I'm just saying that you're happy that it happened but you voted against it. That's why I say it's a suggestion of a hedge. What was the vote on the council?