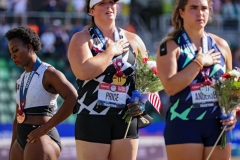 (CNSNews.com) - U.S. hammer thrower Gwen Berry turned her back on the U.S. flag during the National Anthem while at the podium at the Olympic Trials on Saturday.

She told reporters she felt like “it was a setup, and they did it on purpose,” because she thought the National Anthem would be played before the athletes walked out. When it was played while they were on the podium, she said, “I was pissed, to be honest.”

“I don’t really want to talk about the anthem because that’s not important,” Berry said. “The anthem doesn’t speak for me. It never has.”

She said her “purpose and mission” is “bigger than sports” and that she’s “here to represent those ... who died due to systemic racism.”

“What I need to do is speak for my community, to represent my community and to help my community. Because that’s more important than sports,” she added.

When asked about Berry’s actions and whether President Joe Biden thinks it’s appropriate behavior for someone who wants to represent Team USA, White House Press Secretary Jen Psaki spoke in defense of Berry’s actions as a form of protest.

“I haven’t spoken to the president specifically about this, but I know he’s incredibly proud to be an American and has great respect for the anthem and all that it represents, especially for our men and women serving in uniform all around the world,” Psaki said.

“He would also say of course that part of that pride in our country means recognizing there are moments where we as a country haven’t lived up to our highest ideals, and it means respecting the right of people granted to them in the Constitution to peacefully protest,” she said.