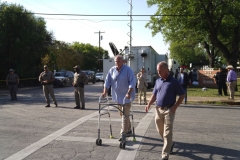 Uvalde, Texas, Mayor Don McLaughlin (C) leaves the Robb Elementary School after a visit on May 25, 2022. (Photo by ALLISON DINNER/AFP via Getty Images)

In the wake of the Uvalde school shooting, the mayor said that while people usually talk about treating mental health after shooting massacres like this, not enough is being done to actually address it.

He said that instead of sending billions of dollars to countries “that don’t even like us,” we should invest in the United States and build mental health facilities.

“The gun played a role in it too, but what if we would have been able to help this child. What if some incident would have triggered somebody could have caught and we could have got him help and we might could have avoided this, but the problem is we don't do anything. When we have a mental health deal here, they evaluate you, ok, go on. We don't have any services in rural Texas,” McLaughlin said.

“You have to go to San Anton or you gotta go to Kirby or you gotta go to Austin, they are two, two and a half hours away and a lot of these families done have the ability to get there. So It's time we talk about treating mental health, addressing the issue, and we need to quit talking about it. We give billions of dollars away to countries that don't even like us,” the mayor said.

“We ought to take that money and invest in our own country and building facilities. Look at the homeless people in Houston, Austin, San Antonio, all over the United States that are on the street that have problems and they are not getting any help from anybody. We just leave them,” he added.

McLaughlin was hopeful that there will finally be mental health resources invested into his community.

“I'm hoping so. Two years ago we started working right before COVID started, the city donated 7.5 acres and we were trying to get a mental health hospital built in Uvalde, because it would be the hub for 44 counties to be able to come to Uvalde and receive treatment,” he said.

“Of course, you know, all of a sudden it was a go and then all of a sudden we were told we had to raise $26 million to build this facility. We don't have that kind of money. So now we are going to go back out and start looking at can we build a smaller one or something, but rural Texas lacks these services,” the mayor said.

“This hospital in Uvalde would be the first opportunity to service all these counties in our area, and hopefully we can get this hospital built and have the help that these people need in our area and the surrounding area,” McLaughlin added.