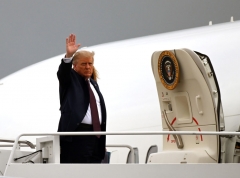 President Donald Trump waves as he boards Air Force One at Joint Base Andrews in Maryland on September 11, 2020. (Photo by ANDREW CABALLERO-REYNOLDS/AFP via Getty Images)

(CNSNews.com) - President Donald Trump commemorated the 19th anniversary of the 9/11 terrorist attacks in New York, Washington, D.C., and Pennsylvania by paying tribute in person to the occupants of Flight 93 in Shanksville, Pa.

“Nineteen years ago, on this day, at this very hour, on this field, 40 brave men and women triumphed over terror and gave their lives in defense of our nation. Their names and their stories are forever inscribed on the eternal roll call of American heroes. Today, we pay tribute to their sacrifice, and we mourn deeply for the nearly 3,000 precious and beautiful souls who were taken from us on September 11th, 2001,” he said.

“To the family members of Flight 93: Today, every heartbeat in America is wedded to yours. Your pain and anguish is the shared grief of our whole nation. The memory of your treasured loved ones will inspire America for all time to come. The heroes of Flight 93 are an everlasting reminder that no matter the danger, no matter the threat, no matter the odds, America will always rise up, stand tall, and fight back,” the president said.

Trump said that he and first lady Melania Trump are “deeply aware” that they could not “fill the void in your heart or erase the terrible sorrow of this day.” However, he promised “unwavering love,” support and devotion.

“On that September morning, when America was under attack, the battle turned in the skies above this field. Soon after taking off from Newark, New Jersey, radical Islamic terrorists seized control of United 93. Other hijacked planes struck the North Tower of the World Trade Center, and then the South Tower, and then the Pentagon,” he said.

“The terrorists on Flight 93 had a fourth target in mind. It was called: our nation’s capital. They were just 20 minutes away from reaching their sinister objective. The only thing that stood between the enemy and a deadly strike at the heart of American democracy was the courage and resolve of 40 men and women -- the amazing passengers and crew of Flight 93,” Trump said.

“When the plane was hijacked, they called their families and learned that America was also under attack. Then they faced the most fateful moment of their lives. Through the heartache and the tears, they prayed to God. They placed their last calls home. They whispered the immortal words, ‘I love you.’ Today, those words ring out across these sacred grounds, and they shine down on us from heaven above,” he said.

“When terrorists raced to destroy the seat of our democracy, the 40 of Flight 93 did the most American of things: They took a vote, and then they acted. Together, they charged the cockpit. They confronted the pure evil, and in their last act on this Earth, they saved our capital. In this Pennsylvania field, the 40 intrepid souls of Flight 93 died as true heroes. Their momentous deeds will outlive us all,” the president said.