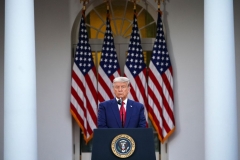 President Donald Trump delivers an update on "Operation Warp Speed" in the Rose Garden of the White House in Washington, DC on November 13, 2020. (Photo by MANDEL NGAN/AFP via Getty Images)

(CNSNews.com) - President Donald Trump announced Friday that the COVID-19 vaccine manufactured by Pfizer will be widely available to everyone by April thanks to Operation Warp Speed, despite reports to the contrary, and because New York Gov. Andrew Cuomo expressed skepticism about a vaccine rollout under the Trump administration, his state may be the last to receive it.

The president also stressed that the vaccine will be manufactured and distributed because of the $1.95 billion the federal government gave Pfizer as part of its Operation Warp Speed program despite reports to the contrary.

The company announced on Monday that the vaccine is considered 90 percent effective. After Republicans praised Trump for making the vaccine possible through Operation Warp Speed, Kathrin Jansen, the company’s vice president for vaccine research, told The New York Times, “We were never part of the Warp Speed. We have never taken any money from the U.S. government, or from anyone.”

However, the Department of Health and Human Services, announced on July 22 that it had awarded $1.95 billion to the company for “large-scale manufacturing and nationwide distribution of 100 million doses of their vaccine candidate.”

HHS announced up to $1.95 billion in funds to Pfizer for the large-scale manufacturing and nationwide distribution of 100 million doses of their vaccine candidate. The federal government will own the 100 million doses of vaccine initially produced as a result of this agreement, and Pfizer will deliver the doses in the United States if the product successfully receives FDA EUA or licensure, as outlined in FDA guidance, after completing demonstration of safety and efficacy in a large Phase 3 clinical trial, which began July 27th.

“Our investment will make it possible for the vaccine to be provided by Pfizer free of charge. Pfizer said it wasn’t part of Warp Speed, but that turned out to be an unfortunate misrepresentation. They are part -- that's why we gave them the $1.95 billion, and it was an unfortunate mistake that they made when they said that,” Trump said in a White House Rose Garden press conference.

“This far exceeds any and all expectations. Nobody thought that they would get to that level, and we have others coming which we think will be at equal level. Maybe more, if that's possible,” the president said, adding that the government’s investment “will make it possible for the vaccine to be provided by Pfizer free of charge.”

“We will work to secure an emergency use authorization, which will be coming down extremely soon, and my administration will then coordinate the distribution of the vaccine, and it will be approved, I think again. It will be approved very, very quickly, we hope,” he said.

Trump noted that the average development timeline for a vaccine, “including clinical tests and manufacturing can take eight to 12 years,” but through Operation Warp Speed, “we are doing it in less than one year.”

“Three other vaccines are also in the final stages of trial. They will arrive within a few weeks, and they will also be mass-produced, and the delivery will be very rapid. We are ready to go. The vaccine will be distributed to front-line workers, the elderly, and high-risk Americans immediately. It will be very -- a matter of weeks - get out very very much ahead of schedule,” Trump said.

One state that likely won’t get the vaccine once its ready for dissemination to the general public is New York, because New York Gov. Andrew Cuomo because he expressed concern about it being rolled out under the Trump administration. Instead, he wants to wait until former Vice President Joe Biden takes office.

“We can’t let this vaccination plan go forward the way that Trump and his administration is designing it,” Cuomo told ABC’s “Good Morning America” on Monday.

“The bad news is that it’s about two months before Joe Biden takes over, and this means [the Trump] administration is going to be implementing a vaccine plan,” Cuomo said, calling Trump’s plan “flawed.”

“As soon as April, the vaccine will be available to the entire general population, with the exception of places like New York state where, for political reasons, the governor decided to say -- I don't think it's good politically. I think it's very bad from a health standpoint but he wants to take his time with the vaccine. He doesn't trust where the vaccine is coming from,” Trump said.

“This is a very successful, amazing vaccine at 90 percent or more. So, the governor, Governor Cuomo will have to let us know when he is ready for it. Otherwise, we can't be delivering it to a state that won’t be giving it to its people immediately, and I know many -- I know the people of New York very well. I know they want it, so the governor will let us know when he’s ready,” the president said.

“He's had some very bad editorials recently about this, this statement, and what has happened in respect to nursing homes his handling of nursing homes, and I hope he doesn't handle this as badly as he’s handled the nursing homes, but we are ready to provided as soon as they let us know that they will actually use it, and again, it's a very safe and a great vaccine,” Trump added.