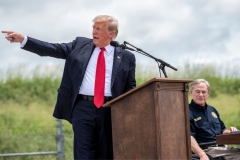 Former US president Donald Trump gestures as he speaks, flanked by Texas Governor Greg Abbott, during a visit to the border wall near Pharr, Texas on June 30, 2021. (Photo by SERGIO FLORES/AFP via Getty Images)

(CNSNews.com) – Former President Donald Trump said Wednesday that his administration stopped the flow of drugs that were coming into the United States through the southern border, and they were up against some of “the toughest people” – the cartels.

In an interview with Fox News’s “Hannity, Trump said the cartels have “smart people,” who he compared to graduates of the Wharton School of Finance.

It was over. We stopped a lot of the drugs that were coming in, which is very tough to do, and they have some real criminals bringing stuff in. They have the toughest people. These cartels, these are tough, smart people. They’re like they went to the Wharton School of Finance and graduated number one in their class, but they never did that, but they would have graduated number one.

They are very tough and smart, and what they have been doing with human trafficking and drugs and all of the other things is a disgrace. We had it largely stopped, and in two months, three months, they ended. Stay in Mexico was so great. Stay in Mexico. They couldn’t stay in this coun-- and they ended it,” the former president said.

You take a look at -- the governor’s saying catch and release. I ended that. That’s where you catch a criminal and release them in our country, and then they are supposed to come back for a trial three years later, and Louie Gohmert, I’d say they don’t come back to trials, right? You would never see them. Is that correct. Louie?

Then comes in Biden, and he stops building the wall. All you needed was two more months, and you would have had it completed, but even so, we built almost 500 miles of wall, and it really had such a huge impact, and that people had an impact, and the sheriffs are and law enforcement generally in Texas has done an unbelievable job, but they are getting no support from the federal government.