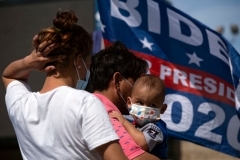 Migrants are seen with a US President Joe Biden campaign flag in the background at a camp where asylum seekers wait for US authorities to allow them to start their migration process outside El Chaparral crossing port in Tijuana, Baja California state, Mexico on March 17, 2021. (Photo by GUILLERMO ARIAS/AFP via Getty Images)

“The women who come across the border and the little girls, we have what we call rape trees on the other side of the border because we've known through our history, and I've been down to the border many times,” Patrick told Fox News’s “America Reports.”

“The rape trees are real, and that’s kind of a price that every young woman or every woman that crosses the border knows she has to pay to that coyote, the smuggler who brings her. It’s kind of part of the trip. You know, I’m just going to have sex with you,” he said.

Patrick was asked to react to Vice President Kamala Harris laughing when asked whether she plans to visit the border.

She is laughing. The DHS secretary is lying, and the president - he’s lost. He is just lost on this issue. Think about this when they talk about there isn't a crisis. They just announced they will spend $86 million to put people up in hotels along the border. If you do the math, based on the reports, that's 1200 people. It works out to about $70,000 per person per six months.

I guess you get free breakfast. You get late check-out and citizenship with that. What do we spend on any American citizen that works out to $12,000 a month in public benefits? What I don't understand is their lack of compassion for the pain that we're seeing on these coming to America and the pain that they are bringing to America, the overcrowding, literally an invasion on the border.

I say their total lack of acknowledgement of what is happening. There was a 9-year-old boy who drowned the other day trying to swim across the river. Is that the kind of policy they want? We have apprehended 100,000 people crossing the border in Texas, Bill and Dana, in the month of February.

If you do the math, that will be over a million this year and another two or three get in for every one we catch. That’s 2 or 3 million this year that they want to turn into citizens and then give them voter registration cards and then harvest their votes so that they have a grip on power for the rest of their lives. They want to make this a one-party country and they are willing to see children die in the river.

Patrick said that what’s happening at the border was planned by the Biden administration.

“Bill, let me say it as loud as I can and shout it from the rooftops. You either have to be totally ignorant of what’s happening, totally stupid because you can't even look at numbers and see how the numbers are up, or it's by design, and it is by design. What worries me about the secretary of homeland security, we can all see this. You don't have to live in Texas to see it," he said.

“You all have video of it. We see them in the cages they said they would never put anyone in. We see them just pouring across the border and swimming across the river every day and he says we don't have a crisis. He said the border is secure. Bill and Dana, the border has never been less secure in my 40 years that I've lived in Texas," the lieutenant governor said.

"They blame it on the Trump administration? Trump actually had it handled. We had it controlled for almost every month that he was president. So when they lie to you about this, something you can see, something that's tangible, what are they lying to us about that we can't see? I mean this person, Mayorkas is in charge of homeland security. How many terrorists are coming across the border? Bill, this is design. This is by the design," Patrick said.

“It is a plan. When I say they are lying, they are lying about something that's obvious because they want to hide it even though we can see it in plain sight. They are laughing about it, because they aren't taking it seriously. If they were, they would do something about it. The president is lost because I don't know if he even knows what's going on. So he may not know it's a plan. He is just lost, but those around him, it’s a plan," he said.

Sens. Ted Cruz (R-Texas) and John Cornyn (R-Texas) plan to lead a congressional delegation to the border this Friday.

“I know that the Republicans will see the same things. We had six of our female Senate ladies go down there yesterday as moms to see what was going on, and what they saw was just horrendous. We know that Cruz and Cornyn will see it and tell the truth. We know the Democrats will come down and see it and pretend it's not there. They have to pretend it's not there or admit to the American people they’re letting our country be invaded," Patrick said.

"Soon we're approaching 1 out of 10 people living in America came illegally, and they will be in control of our government. They will be in control of your future. These criminals that are crossing the border, I don't care where you live today watching this newscast this morning. They’re coming to your town. They are coming all over the country. Now Bill and Dana, they’re not even apprehending them. They’re not giving them a summons to come to joke. That's a joke. It's a total joke. No one shows up," Patrick said.

"Now when they come across the border you just go off on your own. They don't know if they have COVID. They don’t know if they’re a criminal. They don’t know where they're going. We also know that children 6, 7, 8, 9, 10, 11 are coming by themselves. They’re being smuggled in here by the cartels who are reportedly making anywhere from $15 to $20 million a day from the people they smuggle," the lieutenant governor said.

"What happens to these kids? They’re going into sex trafficking rings potentially. We don't know where they're going. So again, she laughs about this, and in a critical situation this is nothing to laugh about. As a lieutenant governor of Texas, you don't laugh about serious issues. This is a serious issue about our freedom, liberty, sovereignty and a serious issue for the people," he said.

"By the way, the women who come across the border and the little girls, we have what we call rape trees on the other side of the border because we've known through our history, and I've been down to the border many times. The rape trees are real, and that’s kind of a price that every young woman or every woman that crosses the border knows she has to pay to that coyote, the smuggler who brings her. It’s kind of part of the trip. You know I’m just going to have sex with you," Patrick said.

"This is so offensive, so disgusting, so dangerous to those people, but to our country. I put my country first and foremost. For these people to lie about it, to laugh about it, and Joe Biden just to be lost about it, he’s just a puppet and the people pulling his strings are the liberal progressives around him who want to take this country from us and make it a socialist country, and this is part of the plan," he said.