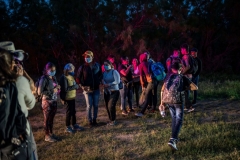 A group of migrants wait to be processed after being apprehended near the border between Mexico and the United States in Del Rio, Texas on May 16, 2021. (Photo by SERGIO FLORES/AFP via Getty Images)

(CNSNews.com) - Texas Gov. Gregg Abbott issued an emergency order Thursday closing down several points of entry at the border after more than 10,000 migrants gathered under an international bridge in Del Rio, Texas, waiting to be processed by Border Patrol agents.

The governor said that the Border Patrol asked for his help, but later flip-flopped, so Abbott was forced to reopen those ports of entry, which are under the control of the federal government.

Abbott explained what happened in a statement Thursday, saying: "Six hours after U.S. Customs and Border Protection requested help from Texas to close ports of entry and secure the border, the Biden Administration has now flip-flopped to a different strategy that abandons border security and instead makes it easier for people to cross illegally and for cartels to exploit the border.

“The Biden Administration is in complete disarray and is handling the border crisis as badly as the evacuation from Afghanistan. I have directed the Texas Department of Public Safety and the Texas National Guard to maintain their presence at and around ports of entry to deter crossings,” Abbott added.

In an interview with Fox News’s “The Ingraham Angle,” Texas Lt. Gov. Dan Patrick said the Border Patrol had to deny asking for assistance because they didn’t have permission from the Department of Homeland Security (DHS) or President Joe Biden.

Here is what happened, Laura, is that we received a call for help from Border Patrol because they are being overrun, and so Governor Abbott with my support and every other Republicans’ support in the state, said, we are there to help you, and then we found out that Border Patrol did not have permission from homeland security or the president, and so they came out and said, ‘No, we didn't say we needed any help. We didn't say that.

So the Biden administration or someone in the administration flip-flopped on the issue. Texas did not take a back step. They asked for help, and we were going to help. Let me tell you something, Laura, and everyone watching, the revolution has begun - a silent revolution by the Democrat Party and Joe Biden to take over the country.

Tomorrow is Constitution Day, and folks, if you haven't read it, you need to read Article 4, Section 4 very quickly. The United States shall guarantee to every state in this union and shall protect each of them against invasion and domestic violence and guarantee a Republican form of government. We need every state, every red state because the blue ones won't do it, to send and invoke Article 4, Section 4 of the Constitution to tell the president that we are being invaded.

Invasion properly defined by most says it’s an unauthorized, uninvited, unwelcomed incursion in your territory or property. This is not authorized by the state of Texas. It’s not welcomed by the state of Texas or any other Republican state I know and they’re not invited. Every red state should invoke this clause because every red state is being impacted and the blue states reportedly don't care.

When I say a revolution has begun, they are allowing this year probably 2 million - that’s who we apprehended, maybe another million - into this country. At least in 18 years even if they all don’t become citizens before then and can vote - in 18 years, if every one of them has two or three children, you’re talking about millions and millions and millions of new voters, and they will thank the Democrats and Biden for bringing them here.

Who do you think they are going to vote for? So this is trying to take over our country without firing a shot. That is what is happening, Laura.

Host Laura Ingraham asked if the illegal immigration issue is a political concern for the lieutenant governor.

“We will now have illegals in this country denying citizens the right to run our government, because our government, our representatives that we elect can't even stop them from coming. So this is denying us our government that's run by our citizens with illegals who are here who are going to take our education, our health care, so it’s government,” he said.

“It’s politics. It’s health care. It’s safety. Do you know how many thousands of people will die in America because of the drugs that are coming across the border or the gang violence? So, Laura, this isn’t politics. This is selling out our country,” Patrick said.