Texas Governor: Mexican Cartels Are Shooting at the National Guard in Roma, Texas 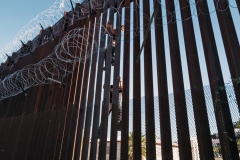 A man tries to scale the border wall attempting to cross in to the U.S. from Mexico at the border October 08, 2021 in San Luis, Arizona. (Photo by Nick Ut/Getty Images)

Abbott said that he’s seeing the border crisis expand beyond what he has seen a year ago.

“And we’re seeing more and more people come in, but I got to tell you there's something getting even worse, and that is the cartels are getting even more aggressive, and the cartels on the Mexican side of the border, they are beginning to open fire on the National Guard that Texas has down on the border to secure the border,” he said.

“This is escalating into a firing war on each side of the border where Texas and our National Guard are having to defend themselves and defend the state of Texas,” the governor said.

He said things are getting worse in other parts of Texas besides Del Rio, where thousands of Haitians crossed the border and set up tents near the international bridge.

“Everyone saw what happened in del Rio with regard to the Haitians that came in there, but right now the hottest point is in Roma, Texas, in the Stark County area, and that's the area where the cartels on the Mexican side of the border are shooting at the National Guard on the Texas side of the border,” Abbott said.

“What Texas is having to do, we’re having to step up and guard multiple points across the entire border,” he said.

Abbott said that the Biden administration has completely abandoned Texas ranchers and people who live on the border.

“They have abandoned people in the state of Texas, and these are counties, and these are people who traditionally have voted Democrat that the Biden administration is ignoring, and he’s putting them in danger, and you heard that rancher talk about the need to carry a gun. Remember Biden said there was no need for anyone to ever have a gun more than six rounds or six bullets, whatever the case may be,” he said.

“These are people who need the firepower to be able to deal with the cartels who may be coming across the border. So this is exactly why people need their Second Amendment rights to protect their own safety and defend themselves on the border, but it's also exactly why Texas is stepping up to do more than any state has ever done to secure this region so that we can help ranchers like that,” Abbott said.

“It's why Texas has devoted more than $3 billion to secure the border. It's why we have the National Guard and the Texas Department of Public Safety on the border. It’s why Texas itself is building a border wall to make sure that we will be able to better secure our borders,” the governor added.