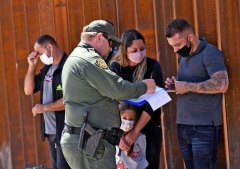 (CNSNews.com) – Texas Gov. Greg Abbott said Monday that he is enforcing the immigration laws in his state by arresting illegal immigrants for trespassing and vandalism in some cases.

If migrants disturb the fencing that the governor is building along the border, they will be arrested for vandalism,” Abbott said.

“So Texas is taking multiple strategies, and I need to give you the context for this, because of the way they the Biden administration is not just incompetent, they are completely ignoring what is going on in the Rio Grande Valley along the Texas border and we’ve seen so many people coming across the border who are harming Texans, and as governor, I cannot allow my fellow Texans to be harmed, to be endangered, to have a gun put to their head, and as a result, here’s what Texas is doing,” he told Fox News’s “Hannity.”

“It's a multistep strategy. First, we are increasing arrests. We are setting up situations where if you’re stepping into the state of Texas, you’re going to be stepping into an area for which there is a no trespassing zone, because I have declared a disaster,” the governor said.

“If you are arrested for trespassing, it is immediately a jail-based defense up to 180 days in jail or higher, and then we’re adding to that working with locals as well as local residents. We are beginning this week to add fencing along the border where if that fencing is disturbed, that is vandalism,” Abbott said.

“That is another crime for which we can arrest people coming across our border into the state of Texas, so we have state laws. Let me explain to you why that's necessary, Sean, because we have been making arrests. We’ve turned over more than 35,000 people that we apprehended illegally in the state of Texas to federal officials,” he said.

“We’re tired of the turnover game and the catch and release game. We want to arrest people and put them in jail for a long time, so they will know they’re no longer going to be getting the red carpet treatment. They’re going to be going to jail if they come into Texas, but we both know that a fence is only a temporary solution,” the governor said.

“The real solution that President Trump began to put in place that Texas is going to continue and that is later on this week, I will be announcing what the Texas plan is for building a border wall. We will continue that process of building the border wall in addition to these other strategies that we will use to make sure that anybody coming here will understand Texas is the wrong state to come into,” Abbott added.

The governor said that Texas will do what the Biden administration has refused to do, and that’s secure the border.

“We will be using every tool available to us under the law and we will ensure that we build the wall, arrest people, and make Texas safe and send a message to Washington, D.C. Stand up and do your job,” Abbott added.