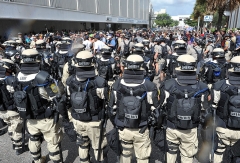 Police in riot gear stop an anti-GOP march from approaching the Tampa Bay Times Forum during a protest rally in Tampa, Florida on August 28, 2012. (Photo by MLADEN ANTONOV/AFP/GettyImages)

(CNSNews.com) - Tampa Police Chief Brian Dugan told “Fox & Friends” on Thursday that calls to defund and disband the police don’t take into consideration who will respond when there’s a mass shooting at a school or mall or an act of terrorism.

President Donald Trump said Wednesday that Democrats want the police to be weakened, defunded, and abolished. Dugan said that Democrats have been calling for his police department to be abolished.

“You know, we’ve had the same calls here where, you know, they’re demanding my job. They want to abolish the police, and that's a very, you know, we need to be very careful about that, and I don't mean to be overdramatic, but the next time there’s an active shooter at the mall. The next time there’s an act of terrorism or a school shooting, who is going to respond?” he asked.

“I think we are at a crossroads in our country right now, and if you are going to make the police the enemy, then you certainly better make friends with the criminals because that's what we are going to have right now,” Dugan said.

Members of his police department were ambushed Saturday when they responded to a 9/11 call that there was shooting between two cars and someone was shot. He said that when officers responded the crowd attacked them, which resulted in two officers receiving head injuries.

“You know, there was a call that there was a shooting between two different cars and that someone was down in the street. We have changed our protocols where we send at least two officers to any type of call that we’re going to, whether it’s a burglary or whatever,” Dugan said.

“This incident we actually sent 9 officers to, and it was clearly just a set up to get the cops there and then surround them, but this is what we are dealing with, you know. Are these block parties or demonstrations? What are they?” he said.

Dugan said that the police are so afraid of losing their job “that they’re not doing their job.”

Dugan said if the police show up and take action, they’re accused of being “heavy handed” and using excessive force. He said when the peaceful protests turn on a dime and the protesters turn on the cops, “it just becomes difficult.”

“And then we have our local prosecutor, who is calling demonstrations, you know, they’re just exercising their First Amendment right and these are peaceful demonstrations, and they are not depicting the whole story. They are leaving the portions out that fit their narrative,” he said.

“You know, we’ve had police cars with smashed windows and things of that, and we’ve had, you know, looting. We’ve had defacing property, and It's just not getting out there, and I think we are running into a situation in this country where, you know, people are now so afraid they’re going to lose their job, that they’re not doing their job,” Dugan said.