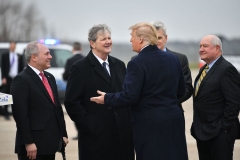 As CNSNews.com previously reported, the mayor turned down New York Gov. Andrew Cuomo’s offer to bring in the National Guard to help deal with the situation in New York City, opting to rely solely on the New York City Police Department for crowd control.

“Look at the videos. It was a disgrace. I believe that. I believe the mayor underestimates the scope of the problem. I think he underestimates the duration of the problem, and I don’t think they’ve used enough police to address the situation, because it’s inarguable that it was not addressed last night. What happened in NYC was inexcusable,” he said.

“I think Governor Cuomo was right. I’m really worried about the cops and the peaceful protesters and the business owners in New York, and I don't know what planet Mayor de Blasio parachuted in from, but I don't see him carrying his happy ass down there and trying to protect people,” Kennedy said in an interview with “America’s Newsroom.”

“He needs help to protect everybody – the peaceful protesters, the cops and the business owners, and if he doesn’t realize he needs help, then he's not qualified to run a hot dog stand as far as I'm concerned. I think he ought to listen to his governor,” the senator said.

“Are you suggesting that National Guard is needed in New York? Is that what you’re saying?” host Sandra Smith asked.

“Well, duh! Yes. I mean all you gotta do is look at Fifth Avenue for God's sakes. I mean it’s horrible, and lawful protesting is as American as baseball. Men and women have died to protect that right in this country on the battlefield and off, but if you don't know the difference between peacefully protesting and felony rioting, then you tested positive for stupid,” Kennedy said.

“And burning down businesses and trying to hurt cops and trying to hurt lawful protesters who disagree with you is a crime. And these people ought to be prosecuted to the full extent of the law, and I think that’s what most fair-minded Americans believe. Now not the people on the people on the crank wings. I get it, and they have the right to their opinion, but you know the law is the law, and it knows no color,” he said.

Kennedy was asked to address the criticism that President Donald Trump received for touting religious liberty while holding a Bible during what was reported as a photo op outside the historic St. John’s Church. Violent protesters had set fire to the church the night before.

According to media reports, tear gas was used on peaceful protesters to clear them out of the area near LaFayette Park, located between the White House and St. John’s Church, before Trump’s arrival.

The U.S. Park Police, however, denied using tear gas on protesters, who they say were anything but peaceful, adding that they threw objects and tried to grab the officers’ weapons.

“At approximately 6:33 pm, violent protestors on H Street NW began throwing projectiles including bricks, frozen water bottles and caustic liquids,” the USPP said in a statement. “The protestors also climbed onto a historic building at the north end of Lafayette Park that was destroyed by arson days prior. Intelligence had revealed calls for violence against the police, and officers found caches of glass bottles, baseball bats and metal poles hidden along the street.”

“As many of the protestors became more combative, continued to throw projectiles, and attempted to grab officers’ weapons, officers then employed the use of smoke canisters and pepper balls when protestors did scatter from the area," the statement said.

“I think a lot of this is just by people that just don’t like Trump, and that’s their right, but—and we’re gonna have an election soon, but he was elected by the American people. I don’t like everything the president does, but I’m sure not going to criticize him for standing for religious liberty, and it was wrong to burn down St. John’s Church. I mean I don’t see how anybody can think otherwise. There’s just no way to justify that,” he said.

“I’ll tell you what I saw on television, and I know there were some folks there who were peacefully protesting, and they should be allowed to do that, but I also saw people throwing objects. I don’t know whether they were bottles of water or bricks or rocks, but I saw that too,” the senator said.