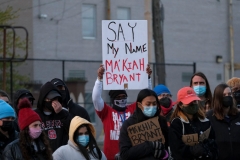 People hold signs as they gather for a vigil in Columbus, Ohio on April 21, 2021 in memory of MaKhia Bryant, 16, who was shot and killed by a Columbus Police Department officer. (Photo by JEFF DEAN/AFP via Getty Images)

(CNSNews.com) – A Rutgers University professor said Thursday that 16-year-old Ma'Khia Bryant, the Ohio teen who was fatally shot by police while trying to stab someone, was “adultified” because of her size, and people saw her as the aggressor instead of seeing her humanity.

“Look, the argument for our movements has never been that black people have to be perfect in order for them to deserve dignity, for us to have good policing, for us to be viewed with humanity, for cops to take a breath before they literally get out of the car guns blazing. So that's the first, right, that this is never what the argument for the movement for black lives has been, is that you just get to kill black people, particularly when they're not being perfect,” Brittany Cooper, associate professor of gender and Africana studies at Rutgers University, told MSNBC’s “The ReidOut.”

“I think about how perfect, as Reverend Sharpton just said, the prosecution had to be in order to get the conviction for George Floyd. It had to be impeccable,” Cooper said.

“They had to leave no stone unturned, and if that is the standard, then no black person is really, truly going to be safe if we cannot be having a bad day, if we cannot defend ourselves when we think we are going to get jumped, if we call the cops and they can't show up and tell who the victim is and who the perpetrators are, and they can't use their training to adjudicate regular, old, everyday community conflict, but beyond all of that, what are we going to do about the way we don't understand black girls as girls,” she said.

“Ma'Khia Bryant was a child like Tamir Rice was a child. The way she has been talked about as this, you know, because she was a big girl right, and so people just see her as the aggressor. They don't see her humanity. They adultified her. We turn black girls into women before they are even able to vote and then and are unable to see them as children,” Cooper said.

“So I have watched folks across the political spectrum really defend this and say -- and empathize with the officer, say that he didn't have any other set of choices. What are we training police to do if they are not actually showing up on the scene and making the situation better for all involved? If you can't figure out how to de-escalate a 16-year-old even with a kitchen knife when you’ve got a gun and you're a grown man, you shouldn't be a cop,” she said.

Phillip Atiba Goff, co-founder and CEO of Center for Policing Equity, said that when people watch the video of Bryant’s shooting, they say, we don’t know what happened before the video started.

“You know what happened before the video started? We had a whole bunch of policies that made it okay to defund medical attention, to defund schools, to defund housing assistance, and now you want to talk about the three minutes beforehand that allow you to demonize somebody's character,” Goff said.

“So absolutely we don't know the specifics of this particular incident, but, as you said, it’s not like someone in foster care has never had a bad experience before. I'm tired of folks talking about, well, what else do you want the officer to do instead of talking about, well, how else can we imagine a society so that a 16-year-old girl doesn't have to be dead,” he said.

Host Joy Reid said the police have tussled with and begged white defendants “who even have a gun, who even have a knife, because in that case too somebody was called because something was criminal, and they seem to have figured out an alternative to killing that person.”

“Kyle Rittenhouse, the police knew he just shot two people. They knew he was behind it. They figured out something else to do,” Reid said.

Rev. Al Sharpton said that Rittenhouse is “the best example.”

“Here’s a man who killed two people and was armed, and they were able to take him, full health and no bodily harm at all. When you look at the data, that is why we are challenging the U.S. Senate. The data shows that they handle whites that are violent, that are criminal, that have even in many ways threatened bodily harm on police, and they don't kill them,” Sharpton said.

“We stood up and voted as a community in unprecedented numbers and put Democrats in the White House, in the Senate and in the House. Now it is time for you to return our investment by protecting our lives against bad cops. We are not saying all cops are bad, but stop acting like all blacks are bad and out of control and the only thing you can do is execute them before a trial and a jury,” Sharpton added.