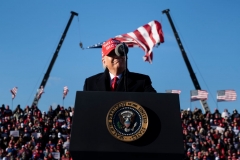 (CNSNews.com) – Pennsylvania Secretary of State Kathy Boockvar said Sunday that she anticipates the overwhelming majority of ballots will be counted within days of Election Day on Tuesday, and members of the military serving overseas have until a full week after Election Day to cast their ballots.

“So, let me start out by saying nearly 2.4 million Pennsylvanians have already cast their ballot by mail. This is going to be 10 times as many as the last time we had a presidential election in Pennsylvania. So, yes, it will take longer, but having said that, I want to be clear that elections have never been called election night,” Boockvar said on NBC’s “Meet the Press.”

“Our military and overseas ballots, you know, the men and women who are serving our country, they have until a full week after Election Day to cast their ballots. So, I just want to set that straight, that this is a process, and we want to make sure that every single vote of every valid voter is securely and accurately counted,” she said.

“So, to your question, I expect that the overwhelming majority of ballots in Pennsylvania, that's mail-in and absentee ballots, as well as in-person ballots, will be counted within a matter of days. The counties are staffing up, have a ton of equipment, best practices in place, and are planning, for the most part, to count 24/7 until it's done, and kudos to all those public servants who are going to make sure it gets done as quickly as possible,” Boockvar said.

“All right, you did confirm, we are looking at days. Now, there's a specific three-day window a lot of people are wondering about, and that is Tuesday to Friday and ballots that are turned in with a postmark, on Tuesday, but after, after 8:00 p.m. Are you still setting those ballots aside, thinking that they could get thrown out?” NBC’s Chuck Todd asked.

Boockvar urged voters to “Ignore the lawsuits, ignore the hype. Just get your ballots in today.”

“The best way you can make sure that your ballot will be counted is to get it in by 8:00 p.m. on November 3rd, and there's never been so many choices in Pennsylvania to do that. There's county election offices, secure drop boxes, other authorized locations. You can find all that on votesPA.com,” she said.

“But, yes, the standing law in Pennsylvania right now is that ballots, as long as they're received by 5:00 p.m. on November 6th, postmarked by November 3rd, they will be counted. But for effective election administration and making sure we have clarity in the counties, those ballots will be segregated, but they will be counted,” Boockvar said.

As to when those ballots will be counted, whether that be immediately or waiting until the courts decide what to do with those ballots, Boockvar said, “So, we're going to be issuing guidance, you know, within a day, explaining to the counties how to canvas. The idea is not to wait, that they should be canvasing them as soon as the 8:00 p.m. time frame passes and the new ballots start coming in. So those will be canvassed.”