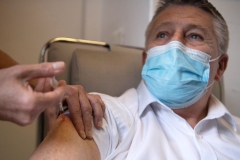 (CNSNews.com) - Operation Warp Speed Chief Adviser Dr. Moncef Slaoui told CBS’s “Face the Nation” on Sunday that there won’t be data before late spring on whether once you’ve been vaccinated, you can still transmit the coronavirus to others.

“Those studies, frankly, are going to be based on observational data into the population. I don't think we will have data before late in the spring, but I can't give you an exact date ” he said.

Host Margaret Brennan pointed out that CVS and Walgreens are expected to receive the vaccine to distribute to the general public in the spring. She asked Slaoui why the administration doesn’t give the vaccine to them now.

BRENNAN: If the states are having a problem, go to the private sector.

SLAOUI: Well, we, as you know, we have agreement with CVS and Walgreens, and we are starting to ship vaccines to those locations as allocated by the states. That's really the key point in the approach we have taken.

BRENNAN: That's why I'm saying, like, why can't you help that?

SLAOUI: I don't think it's a problem, frankly-- I actually-- well, we are here to help. Let me just, for instance, say over the last 72 hours 1.5 million vaccine doses have been inoculated, even though there is a gap in reporting. That's quite an important number. That's 500,000 a day. We are optimistic as we go beyond this holiday season that the numbers will go up, and we are standing ready to do what we are asked. Where there is help to be given, we're standing by to help. I don't think we are able to identify exactly which long-term care facility or which CVS store should be getting more vaccine or less vaccine. That has to be done with people that have granular knowledge of their population, their movements, where the older people are, or, you know, the various groups at risk, and then we'll be there with them.

Slaoui rejected the suggestion that they space out the second dose of the vaccine for those who have already received the first dose so that more people can receive the first dose more quickly like the U.K. is doing.

BRENNAN: Okay, so you're saying that still has to be up to the states to figure out where they have the need, but let's talk about the portion you can control, and that is the federal supply. If the goal is preservation of life, how can you still justify holding back more than half of the manufactured doses that you have? You know we just heard from the U.K. that they're just trying to hit as many people at once. Why not do something like that and space out the time between doses?

SLAOUI: Yes, so a scientific answer and then an alternative. I think it's not reasonable when vaccines have been developed with two doses given 21 days apart, or 28 days given apart, and where we have the data on their safety and their efficacy and we have no-- after two doses. We have no data after one dose. If we leave people a month, two months, three months with maybe incomplete immunity, waning immunity, maybe even the wrong kind of immune response induced, that is then corrected by the second dose to give them.

SLAOUI:  I'm going to tell you the alternative in one second. Just let me finish the point I'm making, which is we always said that these vaccines will be developed on the basis of science and all decisions will be made transparently on the basis of data. Changing the decisions made, the choices made, which was to give two doses of vaccine, the second dose gives you 10 times higher immune response than the first dose, without any data I think would not be responsible. Here is the alternative.

We know that for the Moderna vaccine, giving half the dose to people between the age of 18 and 55, two doses, half the dose, which means exactly achieving the objective of immunizing double the number of people with the doses we have. We know it induces identical immune response to the hundred microgram dose and, therefore, we are in discussion with Moderna and with the FDA. Of course, ultimately it will be an FDA decision to accelerate injecting half the volume. I think that's a more responsible approach that will be based on facts and data to immunize more people. And, of course, we continue to produce more vaccine doses.