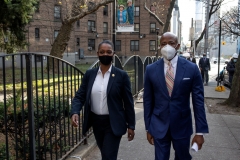 New York City Mayor elect Eric Adams holds a press conference to introduce his choice for the new police commissioner, Keechant Sewell, on December 15, 2021 at an anti-violence community center in the Queensbridge Houses in Queens, New York. Sewell, the first African American woman appointed to the position, grew up in the Queensbridge houses. (Photo by Andrew Lichtenstein/Corbis via Getty Images)

(CNSNews.com) - New York City Mayor Eric Adams said Sunday that one of the things he plans to do to make the city safer is deploy mental health professionals in the subway system to help with the mentally ill.

“Three weeks into our administration, analyzing all of the tools and resources that we have, I'm going to roll out a real plan this week when I speak to the New York public, and we're going to go back to the underlying reasons you're seeing crime in our city,” the mayor told CNN’s “State of the Union.”

“This is a sea of crime that's being fed by many rivers, and we have to dam each one of those rivers, and we have been unsuccessful to do so throughout the years. These crimes did not start during my administration. They have been here for far too long in many parts of our community,” Adams said.

“We have to go after those laws that are not realistic, and understanding what's happening on the ground. We have to stop the flow of guns. We are removing thousands of guns off our streets, and it appears as though, for every gun we remove from the street, five are coming in,” he said.

“That is unacceptable, and then we have to deal with institutional problems. We have failed to educate black and brown children in the city of New York, if not this entire country, and we have put in a new plan in our subway system that's going to increase mental health professionals, and, at the same time, have my law enforcement personnel there, deployed properly,” the mayor added.

“The governor has been an amazing partner, where we're going to have and flood our system with mental health professionals and law enforcement working as a team to move out the disorder that's clearly in the subway system in our city, but, also, we're going to continue to build out. I talked about this,” the mayor said.

“We were able to stop terrorism in this city when state, federal and city law enforcement agencies did information-sharing and deployed together. President Biden heard me. He understands that, and we have placed that in place now in New York City,” he said.

A woman was recently killed after being pushed onto New York City subway tracks by a homeless man.

“You talked about the subway system. I just -- for our viewers who aren't familiar, this is -- what happened was, a woman was pushed in front of a subway train, killed because of that, in Times Square. You said you're going to put mental health professionals in and around the subway system? Is that what you're saying? CNN’s Dana Bash asked.

“To partner with our police personnel and mental health professionals to be more proactive, and not just reactive. We should not wait for someone to carry out a dangerous action, when we know they are on this station in the first place,” Adams said.

“Immediately, when you see a dangerous person there, mental health professionals will be deployed, and that person will receive the proper care and removed from our subway system,” he said.