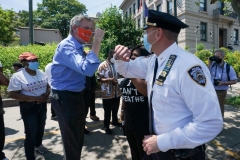 The mayor said that over the weekend his office “presented to the city council a plan that would achieve $1 billion in savings for the NYPD and shift resources to young people, to communities in a way that would help address a lot of the underlying issues that we know are the cause of so many problems in our society.”

The city council is set to vote on the mayor’s plan to defund the police department.

As CNSNews.com previously reported, the mayor’s decision comes as the city has seen more than 500 shootings year to date.

“Even right now, the NYPD doesn’t have enough staffing to shift cops to one neighborhood without making another neighborhood less safe. We will say it again: the Mayor and the City Council have surrendered the city to lawlessness. Things won’t improve until New Yorkers hold them responsible,” Lynch said in a statement.

The mayor began his press conference on Monday saying, “This has been the toughest budget that we’ve had to do as an administration here at City Hall.”

“We’re in a whole different situation in fact than New York City’s ever faced in our history. A health care crisis, an economic crisis, a disparity crisis, a budget crisis all wrapped into one and on a massive, massive scale. So we keep coming back to the fact that we’ve got to focus on those basics: Health, safety, food, shelter,” de Blasio said.

“But while we’ve been trying to do that, we have been dealing with an extraordinary loss of revenue - $9 billion has evaporated in the course of the last few months. Revenue that used to be plentiful because of such a strong economy, it’s gone. So what does that mean? Billions in dollars of cuts have happened already in our city budget – more cuts coming, because we have to live within our means,” he said.

“Now, I want to note that while we, NYC, has been doing everything possible to address this pandemic to protect people’s lives, to keep our hospitals together, to … maximize testing, to get people food – 1.5 million meals delivered every single day, all the things that this city is doing, we’re doing alone,” de Blasio said.

The mayor blamed the budget cuts on the federal government’s reluctance to provide stimulus funding.

De Blasio also reached out to the state legislature to borrow the funds it needs, but the state Senate would not budge.

“I went to Albany over the last few weeks, asked for help to help us through this incredibly difficult time with long-term borrowing. I want to thank the State Assembly. They were ready, willing, and able. The State Senate, however, has not acted, and I’m certainly disappointed, and I think New Yorkers are as well but we’re going to persevere,” he said.

“At some point, if Washington doesn’t act, if Albany doesn’t act, then we end up in a very tough situation,” the mayor said.

“We’ll have to put into our budget labor savings, and I hope and pray we’ll find a way to address this situation with labor unions and especially hope and pray that Washington will act on a stimulus, but we’re going to be ready for any eventuality and make sure we’re going to serve New Yorkers no matter what,” de Blasio said.

By cutting funding for the police force in the upcoming budget, the mayor said the money will go towards helping the youth and other priorities like housing.

“At the same time, we have an unprecedented opportunity to change some things, and there has been a very intense detailed focused discussion over the last month on how we change policing, how we focus more on young people and the needs of communities, how we address disparities, how we redistribute, and I have to tell you, it’s been a very productive conversation,” de Blasio said.

“So over this weekend … my office presented to the city council a plan that would achieve $1 billion in savings for the NYPD and shift resources to young people, to communities in a way that would help address a lot of the underlying issues that we know are the cause of so many problems in our society,” he said.

De Blasio said the city’s incarceration rate was at the lowest level in about eight decades.

“We have the lowest level of incarceration since the 1940s. I want people to understand that. There are fewer people in jail in New York City today than any point since World War II, and that’s something everyone should be proud of. We had 180,000 fewer arrests in 2019 than the last year of the Bloomberg administration. By driving down unnecessary arrests, we’re driving down incarceration, and of course, we’re going to close Rikers Island and end that bad history,” he said.

“But there’s still an outstanding issue, and that’s solitary confinement, also known as punitive segregation. Look, we ended it already for young people, and New York City led the way in this nation in addressing the fact that we should not have young people in solitary confinement. We all remember the tragedy of Khalif Browder, and we acted on the lesson of that tragedy. He did not die in vain,” the mayor said.

Browder committed suicide after being held in jail on Rikers Island for three years without being convicted of a crime. He spent two of those three years in solitary confinement.