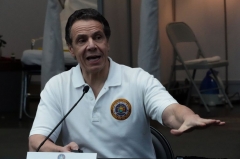 (CNSNews.com) - New York Gov. Andrew Cuomo on Tuesday accused President Donald Trump of prioritizing politics over human lives and rushing to reopen the U.S. economy in a way that does not take into account facts and data on the coronavirus.

“We've seen countries that have opened prematurely, opened early, felt the same pressure. You have seen what happened in Germany and South Korea, and the numbers go up. All the reports say that. The FEMA, the federal agency, says the number of cases per day will go from 25,000 to 200,000,” the governor said.

Cuomo said he understands the pressure that other countries felt, but when they reopened their economies “in a dramatic way,” the death toll and infection rate went up.

“I understand the pressure. That's the pressure the other countries felt, and they re-opened in a dramatic way. The death toll went up. The infection rate went up, and they did a 180, and the people in those countries said, close the valve. We're losing too many people, and I don't believe it's a question of open or re-open. That's how some would like to frame it. If it's open versus re-open, everybody votes re-open, but that's not the choice. It's how do you re-open,” he said.

“So that's what we're proceeding within New York. Nobody's saying in New York we don't plan to reopen. We plan to reopen based on facts and data and science, not on political theory or whim, and not dismissing all the data and all the science,” Cuomo said.

His brother and CNN host Chris Cuomo asked the governor what makes his plans for reopening any different than any other plan considering that all of the plans reveal some kind of exposure.

The governor said his state’s reopening is “phased and calibrated” to the data they track daily.

You just heard the president say he thinks it's going to go well, but every state will say, as you pointed out, they're not there yet. They have to come up to scale. You then have to put tracing in place, which is an enormous undertaking that's never been done before. That he has to be put in place to gauge the re-opening. You can't really phase this and calibrate it without testing and tracing. So we're preparing for a re-opening. We have about another week before we could open some regions of the state.

We do see regional variations across the state, and we're responding to those, because there are different facts upstate than downstate, so we're responding to those, but we're not going to be pressured into it. It's not a question of emotion -- I'm tired of staying home. I'm worried. I'm anxious. Yes, everybody's worried, and everybody's anxious.