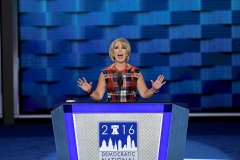 “I’m proud that New Mexico has shown what climate leadership looks like. While the Trump administration has been eliminating environmental protections, we’ve expanded them. While they’ve been rolling back regulations on oil and gas, we’ve taken on polluters and held them accountable,” the governor said in a virtual speech at the Democratic National Convention.

“We’ve committed to a renewable energy future with exciting and fulfilling careers for workers all across our beautiful state, including right here in the heart of northern New Mexico,” Grisham said.

“We’re laying a roadmap here for what America can and should look like in the 21st century, an America where we lead again, where we build safer, cleaner and more affordable cities and communities, where we provide meaningful opportunities for workers and families to thrive and build better lives,” she said.

The governor said that former Vice President Joe Biden will rejoin the Paris climate accord, which President Donald Trump formally began to withdraw from last year. The withdrawal will be complete in November.

“As president, Joe Biden will rejoin the international climate agreement, and United States will once again lead on this critical issue. At home, he’ll invest in energy workers and he will deliver for working families across the U.S., helping them build meaningful careers, while accelerating our nation and world into a clean, green 21st century and well beyond,” Grisham said.

“We know time is running out to save our planet. We have a chance this November to end two existential crises – the Trump presidency and the environmental annihilation he represents,” the governor said.

“We have the chance this November to attack the climate crisis, invest in green 21st century jobs and embrace the clean energy revolution our country, our young people are crying out for, and the leadership the rest of the world is waiting for,” she said.