Nebraska Gov.: ‘The Real Threat to Security Is the Dangerous Defund the Police Movement’ 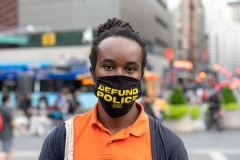 A man wearing a "defund police" mask poses in Union Square as the city continues Phase 4 of re-opening following restrictions imposed to slow the spread of coronavirus on September 24, 2020 in New York City. (Photo by Alexi Rosenfeld/Getty Images)

“That is not the single greatest thing to our safety and security in Nebraska. In fact, if you look over the course of last year with the riots, what -- I think you see this across the country. The real threat to security is the dangerous defund the police movement, which is in some states, not in ours, but in some states, underlying law enforcement and preventing them from doing their job,” he said at Fox News’s “Red State Trailblazers” town hall event in Orlando, Fla.

“And frankly, when I talk to my county prosecutors, my law enforcement, you know who that harms the worst? It’s our folks in the minority communities, because they know that the police are there to help them. Now, we’ve got to change this narrative with regard to law enforcement,” Ricketts said.

“It has never been harder to be a law enforcement official than right now. We need to support our police, not attack our police,” the governor said.

Texas Gov. Greg Abbott, who was also present at the event to celebrate Republican governors, said that Democrats “use race to divide and then attack each other, and It's wrong.”

“And so it doesn't matter your color, what your background is. Texas is a land of opportunity for everybody, and we want to unite everybody, not divide people,” the governor said.

“If you don't, people can sue the local government for their damage to themselves or their property. Finally, if you riot, if you loot, if you’re violent in one of these assemblies, we're putting you in jail, period,” the governor said.

A similar bill is being considered in Iowa, and Gov. Kim Reynolds said she will sign it.

“And we actually in the middle of the civil unrest last year, I brought legislators from both parties to my office in the Senate and the House. We sat down with three days we hammered out the More Perfect Union that passed the House, the Senate and I signed in one day, and actually it was supported by law enforcement and civil rights organizations,” Reynolds said.

“You can come together and you can do the right thing. It just enhances training. It limits chokeholds, and it punishes bad actors, but we also are doing Back the Blue that actually does a lot of the things that Governor DeSantis just talked about. We do not fund cities. They’ll get no more state dollars if they defund the police. If you’re going to peacefully protest, absolutely. You have the right to do that,” she said.

“If you’re gonna riot, if you’re gonna block highways and roads, you're going to pay a price for that. We're increasing the penalties for that. We won't stand for it, so we’ve got a great bill that’s working its way through the legislature that really supports our law enforcement and all the great work that we’ve done, but we've done both,” the governor added.