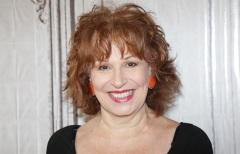 (CNSNews.com) – The National Fraternal Order of Police called out “The View” co-host Joy Behar on Thursday for suggesting that a Columbus, Ohio, police officer could have fired a warning shot in the air instead of fatally shooting a 13-year-old girl he saw about to stab another girl with a knife.

“If you’re going to comment on police matters, have the decency to educate yourself first. You owe it to your viewers. Warning shots are prohibited by every agency in this country. Also, you might want to take a physics lesson... what goes up, must come down,” the National Fraternal Order of Police tweeted.

On Thursday’s show, Behar explained that he and CNN host Don Lemon texted each other about the case, and Lemon took a different view of the Ohio shooting.

On his show Wednesday night, Lemon said that police responded to “a dangerous incident where someone is armed with a knife.”

“Police walked up on a situation, and they need to figure out what is happening. Other lives are in danger. We need to be honest and use our common sense. We cannot have a double standard. We have to acknowledge that police have jobs to do,” he said during Wednesday’s show.

Co-host Whoopi Goldberg pointed out that Behar and Lemon were talking about the 13-year-old getting shot by police.

“Well, he texted me, because I mentioned this case yesterday vis-a-vis the George Floyd case. He said, you know, that he -- the cop had no choice or something to that effect. My feeling is I don't know if that's true or not. I really can't figure it out anymore. I mean, it seems to me in a situation -- this is what it looked to me and I looked at the tape and still can't figure it out,” Behar said.

“I can't explain it any better than that, but he and I were going back and forth last night, because he has a completely different view of this. All I can say is we keep talking about this over and over, and kids still keep getting shot. It's like the gun issue in this country. People keep getting shot, and nothing ever gets done about it. It's a very frustrating conversation to have, but I can't add much to it,” Behar added.