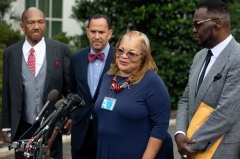 (CNSNews.com) – Dr. Alveda King, Dr. Martin Luther King Jr.’s niece, told “Fox and Friends” on Monday that the police are looking at black people as perpetrators, not people “a lot of times.”

Rayshard Brooks, who was fatally shot by police in Atlanta while running away from police who tried to arrest him after responding to a report of a man asleep in the drive-through of a Wendy’s restaurant, saw the police as a threat, King said, which was probably why he took the officer’s Taser and aimed it at the officers.

The police, in turn, saw Brooks as a threat, instead of as a person, Dr. King said.

“You have to remember that Jesus spoke peace to the storm. We're not going to have justice until we speak peace, but when we do that we have to have prayer, purpose, positive planning and positive action,” she said.

“We have to have a plan, so we have to speak peace, and finally, Martin Luther King, Jr., said when you value the hurt, human personality, you won't kill anybody. Rayshard saw threat. He took a Taser and shot at the police. That was not a good plan at all,” King said.

“The police officers saw a perpetrator and not a person. We're not seeing people, and we're killing each other. We've got to see. we've got to pray, we've got to forgive and be rational,” she said.

King said that the people of Atlanta, which is her hometown, want answers in the Rayshard Brooks case.

When asked what comes to mind when looking at the video of the Brooks shooting, King said, “When I watch the video - actually, we don't know if the young man was homeless, if he wasn't feeling well, if he had fallen asleep in his car for a strange reason.

“So you wake up out of your sleep, you feel like you're threatened.You begin to try to defend yourself against you don't even know what, and then like I said, police officers right now see perpetrators. They don't see people a lot of times, so It's easy to do what happened to George Floyd,” she said.

“You just kill whatever you think without seeing a person who has a family who loves them, who’s calling out for his mother. So we have to see people. We have to be not color blind. We can see skin and all that, not be color blind but warm blood, human beings,” King said.

“We are not seeing each other. We're not listening to each other. That is the problem, and we actually have to ... pray, have purpose, positive planning, and positive action,” she said.

When asked for her final thoughts on how we can come together, King said, “Come together, in prayer, love, forgiveness, act positively, stop killing people.”