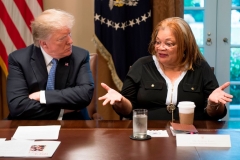 Juneteenth is the national commemoration of the ending of slavery in the U.S. June 19th marks the day that slaves in Texas learned two years later that President Abraham Lincoln had signed the Emancipation Proclamation ending slavery.

“This is a dream come true for me - the acknowledgement broadly of Juneteenth. As an African-American woman, I have celebrated Juneteenth for many years. In the Bible, Juneteenth would be associated with jubilee, a time of liberty, repentance and restoration,” said King, who serves as director of African-American outreach for Gospel of Life, headed by Father Frank Pavone of Priests for Life.

“I even think about the little babies in the womb, I hope there's a Juneteenth for them. I’m over at Civil Rights for the Unborn with Priests for Life,” she said.

“However, on skin color basis, although we are only one race, we're not separate races. We're not races, according to skin color. We're not color blind. We can see each other, but we've not learned that we are one group. Martin Luther King, Jr., said we should live together as brothers - and I added sisters - or perish together as fools,” King said.

“Juneteenth in America being celebrated and acknowledged even in the economic era is a very good sign for America, she said.

“I would like that. As a matter of fact, I'm going to Tulsa to President Trump on Saturday, tomorrow, during this season, and there was a very terrible incident in Tulsa against African America's, Black Wall Street. You need to look up that history,” King said.

She referenced the Tulsa race massacre in 1921 where the Greenwood District, also known as Black Wall Street, was destroyed in riots, and as many as 300 people died.

“I think things like that have to be rectified. We have to acknowledge our sins of the past, come together as brothers and sisters. So I believe a national Juneteenth holiday is certainly appropriate as well,” King said.

Fox Business host Dagen McDowell, who was standing in for Maria Bartiromo, shared a story about growing up in the rural south and how at least half of her teachers were black men and women, “largely black women.”
King said that now is the “time for us to see our history, know our history, learn our history.”

“As President Trump says, we all bleed the same. We are human beings, not separate races. We are one human race. Juneteenth should be celebrated. This is not a time for fighting. This is a time for learning our history, and I think that's marvelous that you had that beautiful experience growing up. Many people need to share those beautiful unifying good experiences,” she said.

“This is the time to share, not to repeat our history, to stop fighting, to start communicating so we can learn to live together as brothers and sisters, and we will not perish as fools. I’m just sure we can do this. I know we can,” King said.