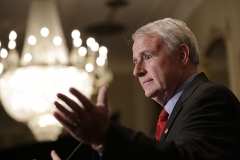 Barrett said that the DNC convention is “not a conventional convention.”

“I would love to be welcoming you to my home city right now. The good people of Milwaukee and I were so excited when we learned that our resilient city was chosen to host the 2020 Democratic National Convention. It was the first time a major political party chose Wisconsin to hold its convention, but these are not conventional times, and as a result, as we all know, this is not a conventional convention,” he said.

The mayor said that unlike Trump, Democrats have “never belittled our public health experts” or made fun of face masks.

“We understand why we can’t be together this week, and I hope you do too, and as our party comes together virtually to nominate Joe Biden to be our next president, we’re showing the country that we’re nominating a leader who isn’t afraid to make tough choices or to work with health experts, not against them to address this pandemic,” he added.