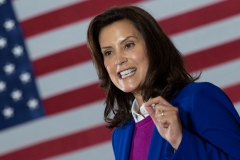 (CNSNews.com) – Michigan Gov. Gretchen Whitmer called it “incredibly disturbing” that days after a plot to kidnap, put her on trial and execute her was uncovered that President Donald Trump is inspiring, incentivizing, and inciting “domestic terrorism” by shouting, “Lock her up” at a campaign rally on Saturday in Muskegon, Mich.

“It's incredibly disturbing that the president of the United States, 10 days after a plot to kidnap, put me on trial, and execute me -- 10 days after that was uncovered -- the president is at it again and inspiring and incentivizing and inciting this kind of domestic terrorism. It is wrong. It's got to end,” Whitmer said in an interview with NBC’s “Meet the Press” on Sunday.

“It is dangerous, not just for me and my family, but for public servants everywhere who are doing their jobs and trying to protect their fellow Americans. People of good will on both sides of the aisle need to step up and call this out and bring the heat down. This is the United States of America. We do not tolerate actions like he is giving comfort to, and that's why we all have to be in this together,” she said.

Whitmer, who has been criticized for having some of the most stringent lockdown policies in the country, said she’s seeing a rise in COVID-19 cases in the state.

NBC’s Chuck Todd noted that the Supreme Court wiped away some of those restrictions.

“That's what the epidemiologists told us all along was going to happen as we got closer to the fall, but I'm concerned, because, of course, the Supreme Court decision in my state has created a lot of confusion and has worked to undermine the work that we've done here. We crushed our COVID spike early on. Our economy rebounded,” she said.

“We're one of the top 10 rebounding economies in the nation. However, it's all at risk, and this partisan decision out of our Supreme Court makes it more precarious than ever, a situation that's already very dangerous,” she said.

When asked what recourse she has given the high court’s ruling, Whitmer said, “Well, I'm going to continue doing my job. So I've got other powers that we are using. We have epidemic powers that my director of Health and Human Services have. So we still have a statewide mask mandate. We still have restrictions on gatherings. We still have the ability to create workplace safety for our workers.

“So there are a lot of things that we're still going to continue to do. I'm not going to get distracted by attacks from the White House or a Supreme Court here in the state that is undermining my work. I'm going to keep going forward and doing everything I can to protect my people,” the governor said.

When asked how she plans to account for lockdown fatigue, Whitmer said, “So last night, the president talked about lockdowns. We haven't had a stay-at-home order since late spring, but I know that he never lets the facts get in the way of comments that he's making. Every moment that we are not focused on the fact that there are 220,000 Americans who have died from this virus is good for him.

“So, in that sense, as he incites additional violence against people who are just trying to save one another's lives, it's good for him, and that's why I don't want to talk about him endangering public servants' lives. I want to talk about what he hasn't done, and that's his job. The Trump virus response is the worst in the globe. I mean, in the world, it's the worst,” she said.

“Eight million people have been, have contracted Covid-19, 220,000 dead. We've got people in food pantry lines who never would have imagined that they'd be there, and no light on the horizon because our numbers keep going up,” said Whitmer, who is campaigning for Democratic presidential nominee Joe Biden.

“This is a gravely serious moment for all of us, and if you're tired of lockdowns or you're tired of wearing masks or you wish you were in church this morning or watching college football or your kids were in-person instruction, it is time for a change in this country, and that's why we've got to elect Joe Biden,” said the governor.

“Do you put this all on the president, that basically he's created this environment and it’s hamstrung everybody up and down the government infrastructure in this country?” Todd asked.

“I do think that the person with the biggest megaphone bears a lot of responsibility here. It's true. This is a public health crisis. It should not be a partisan moment, and yet, he has made it that way to deflect from his administration's inability to get their arms around it. People are dying. People are out of work. People are looking for help just putting food on the table, and there is no relief in sight,” the governor said.

“Our numbers keep getting worse, and that is the sad, hard truth of this moment, Chuck. We should have acted as though we were in a war, but not a war with one another, a war with a virus, and this virus doesn't care what side of the aisle you vote on. This virus is still a very real threat to all of us, and if we could all muster the American spirit and put our masks on and take care of ourselves and one another. We will all be better off,” Whitmer said.