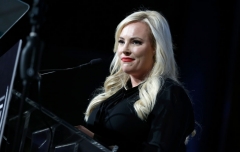 (CNSNews.com) – Meghan McCain, co-host of “The View,” said Thursday that she was “disgusted” by the way Sen. Tim Scott (R-S.C.) was treated by liberals after offering the Republican response to President Joe Biden’s speech to a joint session of Congress Wednesday night.

“In regards to Senator Tim Scott, I'm a huge fan of his. I think he’s a bright future of the Republican Party. He told a story about growing up in poverty and having to move in with his grandmother and having three family members live in one room and his uncle pretending to read the newspaper to show a good example even though he found out he was illiterate,” she said.

“He went on to explain policy reasons why he's a Republican, and in response, he was trending on Twitter being called Uncle Tom and Uncle Tim which many Americans consider a racial slur. So It's okay to be racist and use racial slurs towards black men as long as they are Republicans. I'm disgusted by the response to him,” McCain said.

“Hit him on policy, if you have policy problems with him, but the way he is being talked about, the way he is being disrespected, don't talk to me about micro aggressions with race in this country. Don't talk to me about the problems we have in this country with racism when it's okay to speak and treat a black man this way who happens to be the most famous Republican black senator in the country,” she said.

“It's okay to treat him that way? It's okay for Twitter to let it trend for 11 hours, which is supposed to be against their policies and standards? It's okay to let it trend against Senator Scott? I don’t believe it would have happened if he was a Democrat, and it has so hurt me, disgusted me and saddened me, literally ruined my night and ruined my morning because of it,” McCain added.

“I'm so grossed out by the entire thing. To Senator Scott, there are so many of us that support and love you and think you did a fantastic job last night, and he's the one that should be running for president, not Nikki Haley,” she said.

On Biden’s speech, McCain said she was “really disappointed.”

“I’m going to give you guys a little bit of insight into how Republicans think. There was a concern when President Biden was elected that despite his almost 40-year career in congress as a centrist that he would govern as a progressive that he was sort of this Trojan horse for progressive policies. I had faith he wouldn’t be that,” she said.

“Seeing what he said last night that faith has gone completely out the window. This is by far the most progressive speech of any modern president I think since LBJ. The answer to every problem in the United States of America is to write a check and bankrupt my generation in the process, and if you don’t believe me because I’m conservative, believe ‘The New York Times,’” McCain said.

“They said, ‘Biden, a lifelong centrist has moved leftward and moved the biggest expansion of American government in decades,’ and he's getting praise from people like Alexandria Ocasio Cortez,” she said.

“I think that he is showing himself to be someone who I think – there's questions if he's going to run for president again coming up because of his age, and I think there was an assumption that maybe Kamala will just take his place and run instead,” McCain added.

“And I think he is showing he's going to make his mark and be the most progressive president of my lifetime, and It's very disappointing to the people who had faith in him for running as a centrist,” she said.