Mattis: ‘Trump Is the 1st President in My Lifetime Who Does Not Try to Unite the American People' 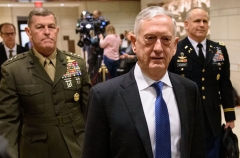 (CNSNews.com) – Retired Marine Gen. James Mattis, who served as secretary of defense in the first two years of the Trump administration, issued a rebuke to President Donald Trump on Wednesday for his handling of protesters.

Mattis said he never dreamed that troops, who take an oath to support and defend the Constitution, “would be ordered under any circumstance to violate the Constitutional rights of their fellow citizens.”

“When I joined the military, some 50 years ago, I swore an oath to support and defend the Constitution. Never did I dream that troops taking that same oath would be ordered under any circumstance to violate the Constitutional rights of their fellow citizens—much less to provide a bizarre photo op for the elected commander-in-chief, with military leadership standing alongside,”  Mattis said in a statement provided by The Atlantic.

He said he “watched this week’s unfolding events, angry and appalled,” adding that the protesters are “rightly demanding” equal justice under the law.

“It is a wholesome and unifying demand—one that all of us should be able to get behind. We must not be distracted by a small number of lawbreakers. The protests are defined by tens of thousands of people of conscience who are insisting that we live up to our values—our values as people and our values as a nation,” the former Defense chief said.

“At home, we should use our military only when requested to do so, on very rare occasions, by state governors. Militarizing our response, as we witnessed in Washington, D.C., sets up a conflict—a false conflict—between the military and civilian society,” he said.

“It erodes the moral ground that ensures a trusted bond between men and women in uniform and the society they are sworn to protect, and of which they themselves are a part. Keeping public order rests with civilian state and local leaders who best understand their communities and are answerable to them,” Mattis added.

The former Defense secretary then directly criticized Trump, saying he’s “the first president in my lifetime who does not try to unite the American people—does not even pretend to try.”

Trump responded Thursday by calling Mattis “the world’s most overrated General.” The president said that “probably” the only thing Trump and former President Barack Obama have in common was that they both “had the honor of firing” Mattis. He said that Mattis’ “primary strength” was “personal public relations.”

“Probably the only thing Barack Obama & I have in common is that we both had the honor of firing Jim Mattis, the world’s most overrated General. I asked for his letter of resignation, & felt great about it. His nickname was ‘Chaos’, which I didn’t like, & changed to ‘Mad Dog,’” Trump tweeted.

“His primary strength was not military, but rather personal public relations. I gave him a new life, things to do, and battles to win, but he seldom ‘brought home the bacon’. I didn’t like his ‘leadership’ style or much else about him, and many others agree. Glad he is gone!” the president tweeted.