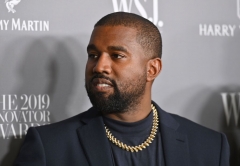 “There’s some harsh facts that deal with the black genocide that is abortion. It’s happening every day, and right now God has given me the information, and he ain’t gave me no other information other than this information, and we have this right now, so that means he wants me to say this now,” West said in a Sept. 1 interview with actor Nick Cannon on his podcast “Cannon’s Class.”

“In 50 years, there’s been 22 million — over 22,500,000 — black people aborted strategically and on purpose. Planned Parenthood was set up and placed in minority communities to kill black people,” he said.

West said Planned Parenthood founder Margaret Sanger “was an avowed racist whose goal was to reduce the black population in America, and she succeeded.”

Host Nick Cannon asked what West would say to people who think he doesn’t have the right to speak about abortion because he’s not a woman or who say that Planned Parenthood does “amazing things and are in those communities” because of need.

“I have to go to the word. God says he knew you before you were in the womb,” West said.

“One other statistic. Abortion is the number one killer of black lives in the United States. According to the Centers for Disease Control and Prevention, abortion kills more black people than HIV, homicide, diabetes, accidents, cancer, and heart disease - watch this one - combined,” West said.