How Do You Socially Distance on a Subway? NY Governor: ‘You Don’t’ 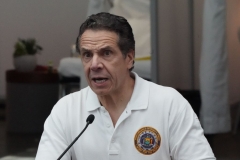 (CNSNews.com) - New York Gov. Andrew Cuomo announced Thursday that the New York subway system, which usually runs 24 hours a day, will be shut down for four hours each day to thoroughly disinfect it and buses overnight.

Cuomo said he wants to ensure that essential workers have a safe, clean mode of transportation, so starting next week, the subway system will close from 1 A.M. to 5 A.M. each day, which are the least traveled hours.

“Hours will be covered by the MTA. They'll provide alternative transportation or they'll use Uber, Lyft, et cetera, if they don't have a route to get people home,” Cuomo told “MSNBC Live.”

But once the state reopens, how will people socially distance on the subway? MSNBC’s Katy Tury asked.

“Two million people came from Europe during the time period in early January and February up to March, and we had no idea, but it is also the density of New York City. You put your finger right on it, Katy. It’s the subways. It’s the buses. It’s the sidewalks,” the governor said.

“That’s why now what we're doing, this disinfecting is going to be a very big deal, and you can't really open the subways ever until you have the pandemic under control, because, you're right.  You can't socially distance on a subway platform, and that's why we have to phase in the reopening of the economy and phase it in with the full demand of the subway system, because if you open up everything, people will go right back to the subways. The virus spread will go through the roof in a matter of days, I guarantee it,” he said.

Cuomo said the subways are open now. They never closed the subways so that the essential workers could get to work.

“You close down the subways, you don't have doctors or nurses. You don’t have food delivery people. You don't have municipal employees. So the subways are open. If you reopen the economy fully, then you will drive many people into mass transit, many people on the sidewalks, and you can't reopen the economy until you know you can handle the pandemic,” the governor said.