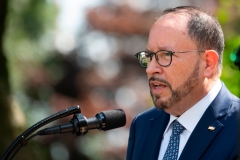 Goya Foods CEO and President Bob Unanue speaks prior to US President Donald Trump signing an Executive Order on the White House Hispanic Prosperity Initiative in the Rose Garden at the White House in Washington, DC, on July 9, 2020. (Photo by JIM WATSON/AFP via Getty Images)

(CNSNews.com) - Goya Foods CEO Robert Unaue told “Fox & Friends” on Friday that he is not apologizing for expressing his support of President Donald Trump despite a boycott against his company that was started after he spoke at the White House on Thursday.

“We were part of a commission called the White House Hispanic Prosperity Initiative and they called on us to be there to see how we could help opportunities within the economic and educational realm for prosperity among Hispanics and among the United States,” Unaue told "Fox & Friends."

“The United States after Mexico is the largest Hispanic country in the world. So Hispanic prosperity means U.S. prosperity,” he added.

Speaking at the White House for an event called the "White House Hispanic Prosperity Initiative," Unaue told Trump, "We are so blessed to have you as our leader."

A Goya boycott was called by liberal Latino politicians and celebrities on Twitter after the event.

Former Democratic presidential candidate and former Obama HUD Secretary Julian Castro said that Goya Foods “has been a staple of so many Latino households for generations.

“Now their CEO, Bob Unanue, is praising a president who villainizes and maliciously attacks Latinos for political gain. Americans should think twice before buying their products," Castro tweeted.

“We learned to bake bread in this pandemic, we can learn to make our own adobo con pimienta. Bye,” actor Lin-Manuel Miranda tweeted.

Rep. Alexandria Ocasio-Cortez (D-N.Y.) tweeted, “Oh look, it’s the sound of me Googling ‘how to make your own Adobo.’”

“I’m glad Hispanics are waking up to the lefts economic disaster. I will vote Republican and encourage many others to do so.  The United Latino Foudation stands with #GOYA,” he tweeted.

Unanue called the boycott a “suppression of speech,” and he pointed out that when President Barack Obama was in office, he was called to the White House for Hispanic Heritage month and he was called on by then-first lady Michelle Obama to help with a project about nutrition.

“It's suppression of speech. In 2012, 8 years ago, I was called by Michelle Obama to Tampa. And they were mentioning to launch of my plate thing which we put on-- it’s putting the nutritional pyramid into a plate of portion control. They wanted to approach the African-American community, the Hispanic community to eat more nutritionally,” Unanue said.

“So they called on us as the most recognized Hispanic brand in the United States, and I went. I went to the White House later and I introduced Hispanic Heritage month President Obama,” the CEO said.

Unanue pointed out the double standard in liberal reaction to him participating in a White House event for Obama versus Trump.

“So you are allowed to talk good or praise one president, but you are not allowed when I was called to be part of this commission to aid in economic and educational prosperity, and you make a positive comment, all of a sudden that's not acceptable,” he said.

Unanue pointed out that under the Trump administration, the Hispanic community has seen the lowest unemployment in history prior to the pandemic.

“Previous to COVID, Hispanic unemployment was the lowest in history, so our --- very proud of our group of employees who are first responders. When this COVID hits, you know, I went to our people and I said, ‘Look, this is going to be tough,’ and they said, ‘if we don't do it, nobody will,’ Unanue said.

“So we have worked around the clock. We’ve never stopped working, and I'm really proud of that, and that's what is part of the tenacity of the Hispanic worker who, you know, wants to contribute to this country, not to take but to contribute and to give and to build,” he said.